*Let’s face it, Kyrie likes his cushioning on the firmer side so if you’re looking for a soft and plush feeling shoe, this is not it and you can stop reading now*

Kyrie is undoubtedly one of those must see TV players you watch because he’ll do things with the ball you’d never imagine possible in an actual NBA game. Watching him play is like watching an And1 mix tape in real time except the defense is actually trying to stop him. Who the hell wouldn’t want to put on his kicks pretend they can be Uncle Drew for a few hours a day? It ain’t the shoes but it’s fun to pretend.

Cons: traction needs break in to work, overall cushioning is firmer than most

Best for: guards and Kyrie lovers

Buying Advice: wait as always. Picked these up on discount with no problems at Dicks for $105 plus tax. These are sitting, just wait for discount. Fair is $100ish low around $65-75 range

16.5 ounces which is slightly heavier than previous Kyries. Same weight as the AJ XI. Dropping bball sneaker weight isn’t a priority anymore nor is it necessary. It’s possible but nobody cares or is competing for lightest shoe anymore. 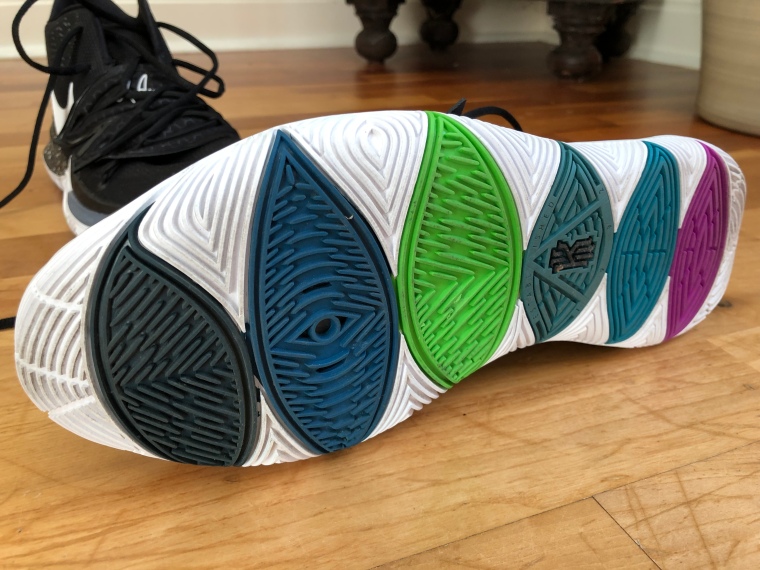 These started solid albeit a little slick even on clean floors. However, over time they broke in as the rubber wore in and softened up.

On clean floors and when freshly wiped these work great. Some wiping is still needed on dusty floors but it isn’t constantly needed like some other shoes out there.

Not as good as the Kyrie 2 but better than the 1 and about the same as the 3 and 4. There are better options out there but these are more than acceptable.

Have you heard that term enough from Nike and shoeTubers? Here is some insight from the designer I found on YouTube

Gotta make a point of differentiation so Nike invented a new Zoom bag called Zoom Turbo. It sounds like a super tedious process but with automation I can’t imagine it would be that difficult or expensive.

Can you feel it? Yes you can feel it but it isn’t the ultra fun Zoom we all love. Yes it is 240% bigger in surface area but it’s also only 8 mm thick vs a more typical forefoot Zoom thst is usually 10-12. Full length Zoom is usually 8 mm so basically you’re getting half a full length bag. Not to mention the articulation of tiny thin Zoom, compartmented into even smaller units makes the Zoom harder to feel. Make the articulated forefoot Zoom like the OG AJ XIV and now we’re talking fun.

One of the other main selling point Nike gives us is that is Zoom Turbo is more flexible. Lost in the selling point is that the rubber in the shoe, the midsole carrier etc are not segmented so you lose most of that flexibility. I can honestly say I can’t tell a difference in flexibility in the forefoot between the Kyrie 5 or PG2 (PG2 Zoom feels much better to me if you’re wondering)

The phylon is softer than what Kyrie 1-3 had but it isn’t as soft as the Cushlon on the 4. I don’t mind it because it reminds me of Curry 1 Charged foam but if you want Boost or KD IX softness, look elsewhere.

Oh I forgot to mention heel Zoom is gone since the forefoot Zoom is what’s marketed /important now. Flip flopping between saying heel Zoom versus forefoot Zoom importance cracks me up year over year. Here’s an idea: JUST GIVE US BOTH!!

Overall cushioning is for guards who want a firmer blended court feel and is not for players who want more impact protection. Improved? Technically it is and it is an improvement over the 1-3. The 4 is definitely softer overall so decide what you prefer before basing a purchase off a review.

Inspired by the Venus flytrap. Cool

As a wide footer, and someone who like a finger width at the toe, I went up half a size to 11.5 and they fit me perfectly. True to size fit but Kyries are not that fat feet friendly. If you like having less room, go true to size but wide footers should still stay half a size up. I really doubt anyone will have to size down.

I know lots of people will have a hard tome getting their foot into the Kyrie 5 but just like any other shoe, loosen the laces (pull strap up) and put your foot in. It ain’t rocket science.

Does the strap work? 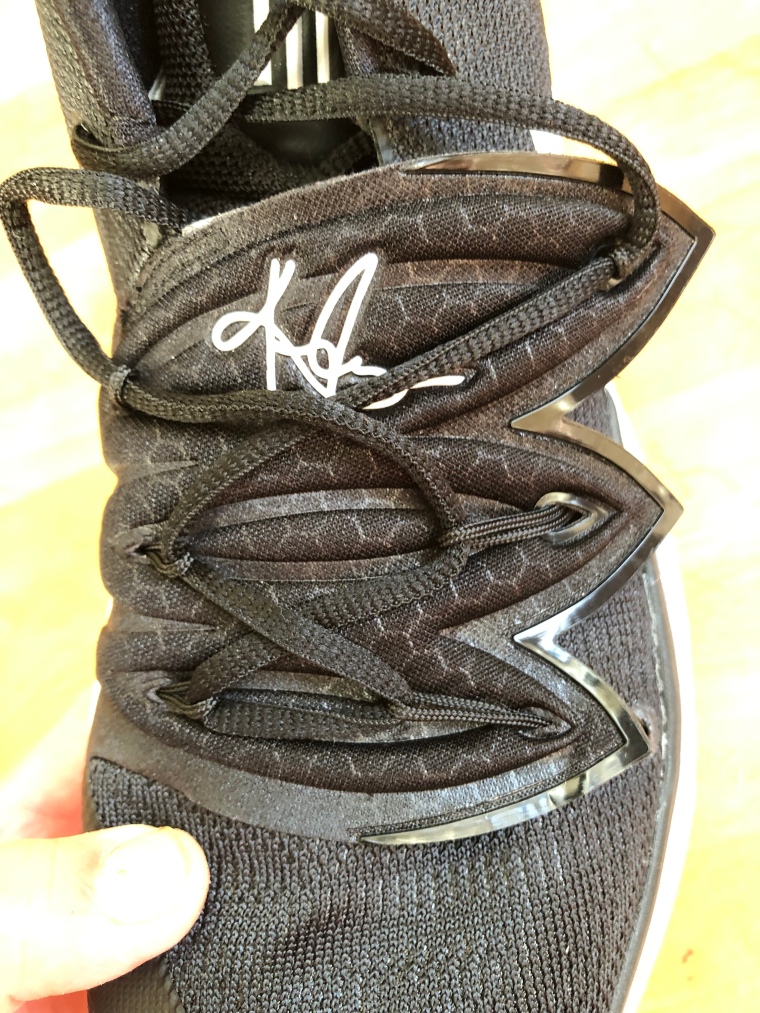 It’s basically a wide strap that goes under the laces rather than over like we’ve seen in the past so yes it works in the sense that it puts more padding between your foot and the laces to even out lace pressure. 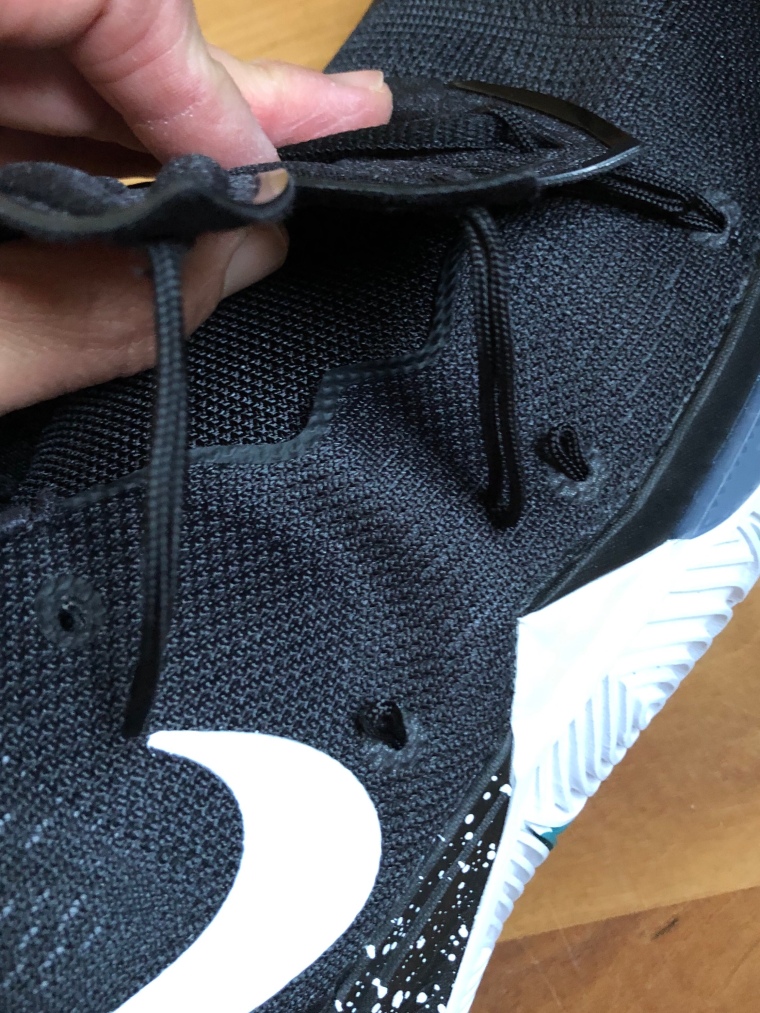 Long straps loop into and through the tiny one. Best to have tiny hands to do this threading.

If you took it off lockdown would be the same but you’d feel the laces a little more ..or you could put more padding in the tongue. However, unlike a traditional strap, you cannot add additional lockdown since it’s literally tied into the laces. I mind how it looks so I can’t complain

The rest of the shoe fit great out of the box with no heel slip or side to side movement. The fit is probably the best part of the show. Well done Nike!

Engineer mesh that feels like a stiffer Kobe 8 engineered mesh due to more fuse.

You’re definitely not going to mistaken this for Prime or Flyknit but it is softer than what we saw on 1-3 and similar to what the 4. All in all it is decent feeling and looking so no complaints here. 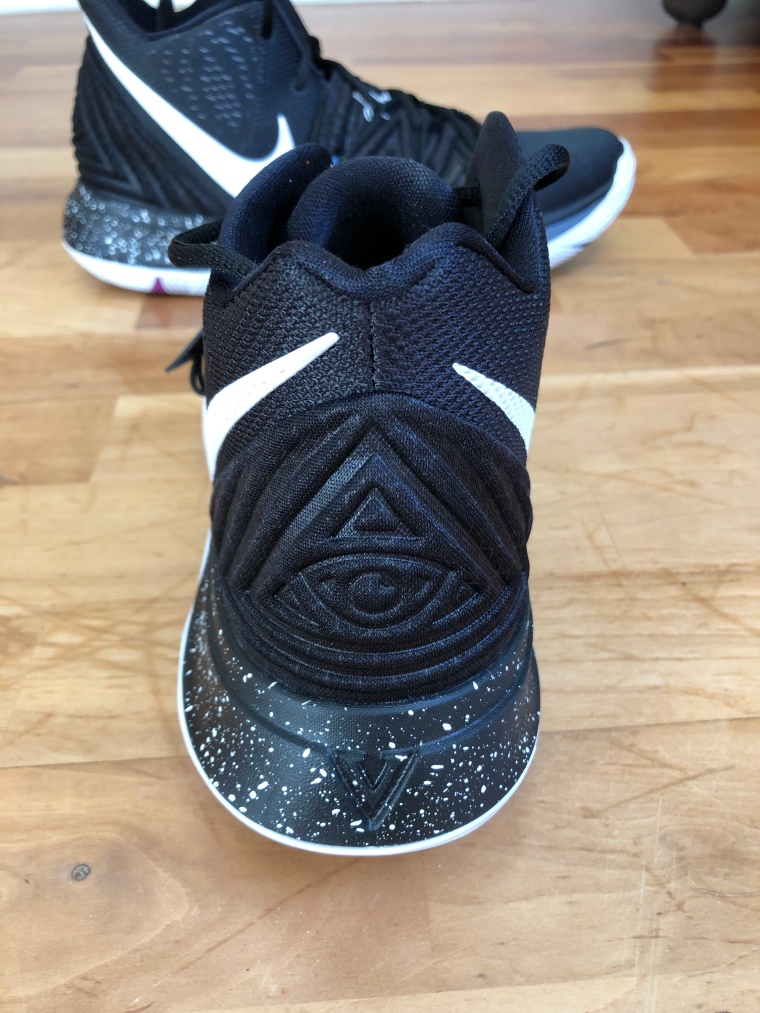 These are cut fairly high for a mid and there is some stiffness around the ankle collar so hey there is a little extra support. There is already an excellent fit and firm heel counter

Midfoot support is there and it starts out pretty stiff but softens up over time without being overly flexible like a lot of newer shoes.

Stability is fine even with the curved outsole. It feels less pronounced that years past and doesn’t affect stability at all.

No issues at all here.

The first time I saw the Kyrie press release I thought geez this is marketing at its finest. But Nike didn’t charge a whole lot more for the Kyrie 5 and the extra widgets on the Kyrie didn’t hurt anything so I’m not mad at all.

Overall I found the shoe very Kyrie like meaning it feels quick stops fast and just feels like a Kyrie shoe but with just a little more softness than what we saw with the Kyrie 1-3. The Kyrie 4 has softer feel than these so if you like that cushioning set up, stick with the 4. I appreciate the surface area coverage in the forefoot although it isn’t the best feeling Zoom but you can tell it’s there for the most part.

A lot of people feel like this is a great shoe for a great retail price of $130 but really? $130 is a great price ? Ten bucks more (at retail) gets you the Harden V3 which is actually less than $140 since Adidas is having fire sales every other month now. You can get the Kobe AD Exodus or 360 if you jumped on the Nike clearance sales for $140. I can even think of a “budget” sig shoe from Nike that plays more smoothly and just as well for half the price of the Kyrie now.

Better feeling cushioning, great fit, excellent traction for $60-70 bucks ? Even at retail it’s $20 cheaper. Plain and simple PG13 gets no love and his name isn’t worth the same as Kyrie (and to be honest he isn’t quite at that level either). Call the Kyrie 5 the PG2 and the bitching would be non stop. On the flip side, if you put the Kyrie name on the PG2, people wouldn’t stop singing the praises of the shoe. It’s funny how player branding works isn’t it?

People will believe what they want to because their favorite player is attached to the sneaker. Nothing wrong with that but it’s all opinion. Should you buy it now? Nope. The Black Magic is just sitting and the Tacos were easy to get if you wanted them. Kyrie is great but he’s not Kobe or Lebron or MJ so just sit back we prices fall with all general release shoes. Trigger worthy around $100 with low prices in the mid 60’s to 70’s. Limited quantity and selling out is not that same as actually selling out of a shoe *see AJ XI*

I do really like the Kyrie 5 overall and I feel like it’s more like an evolution of the Kyrie 3 and is almost totally unrelated to the Kyrie 4. Where did that segmented outsole/ Zig Zag on the sole go Nike btw #gimmicks

This is a very good shoe that does everything well with great traction, fit, and decent cushioning. Zoom Turbo might be “new” but it doesn’t feel or do anything better than a regular thicker forefoot Zoom bag. I think if you love Kyrie and get inspired by the shoe then you’ll love the shoe but don’t be fooled into thinking there is anything ground breaking with the “tech” in the shoe.

Personally, I want to love the shoe and be blown away by some aspect not just like it and the Kyrie 5 falls short for me in that aspect. So with that the Kyrie 5 gets a very solid second team rating.