Kyrie is special, too bad this shoe isn’t 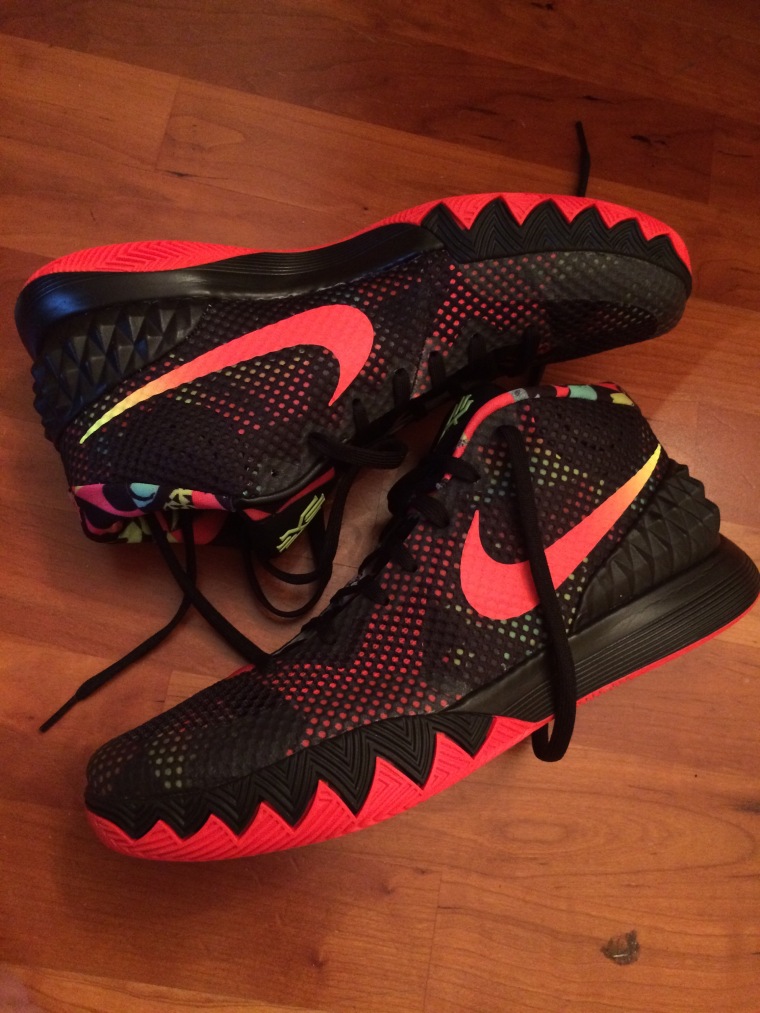 The bad: First gen Hyperfuse feels cheap and almost ancient. Heel slip, super narrow midfoot, Zoom Air is there in theory but can’t really feel it.  No Zoom in the heel, Traction on dirty floors is good but needs to be wiped a lot.

I love Kyrie Irving because he’s fun to watch and he’s not some supernatural freak of nature.  He’s extremely crafty and knows how to use his body to get off to get off some ridiculous shots and he does things with the ball that I couldn’t do in my wildest dreams.   When I heard he was getting a sig shoe I was excited bc I hoped it would exude the same kind of creativity and explosiveness he brings to the court.  Unfortunately, Nike half assed it and just slapped his name on a very average shoe.  At $110, it is inexpensive for a sig shoe but so many better options are out there such as the Under Armour Clutchfit Drive  and DRose 5(with Eastbay coupon code) and even the the lower priced Nike Run the One which is unofficially James Harden’s sig shoe.

Nike calls it 360 degree dynamic traction and it certainly looks cool but it didn’t work all that great unless the floor was perfectly clean.  The rubber is very sticky and picks up dirt so constant wipes are needed to keep the traction decent.  It worked awesome on pristine floors however .  Did I mention it looks cool?

Not all Zoom Air is created alike and unfortunately for the Kyrie I, Nike skimped out and didn’t give us the bouncy Zoom Air we all love. I could barely feel the Zoom Air if it all.  For all I know it was the bounce from the Phylon surrounding the Zoom Air.  No Zoom in the heel either so cushioning overall was very underwhelming.  I don’t mind non Zoom/Boost/Micro G set ups but if you’re going to say a premium cushion is in the shoe for a sig player, please put your best effort into it.  With sig shoes, I expect a higher performing shoe so when the expectations aren’t met, I am always thoroughly disappointed.  I felt like the Run the One had more bounce, liveliness and feel than the Kyrie 1.

The overall fit of the shoe was pretty good although the midfoot was very narrow very much like the Run the One.  I have wide flat feet so this made for some discomfort until the wear broken in.  Basically it felt like the fat flatness of my feet was hanging off the inside of the insoles of the shoe thanks to that narrow fit.  I felt no movement side to side thanks to a firm Hyperfuse upper but I couldn’t get my heel to stay put for very long.  Unless I tied my shoes just the right tension , I couldn’t get locked in and even when I did, after a few sprints up and down the court, the laces would loosen just a touch and my heel would slip.  Unlike the Hyperrev 2015, there are no notches inside the shoe to keep the heel locked in ;actually it is almost entirely flat thanks to that huge heel counter.  If there was actually some padding in the heel collar above the counter, my heel probably wouldn’t slip but unfortunately there isn’t much padding.

The upper did require some break in time but it sure is a step back from the newer Hyperfuse materials that Nike uses.  It does contain the foot well though and I did not really have any hot spots.

I had no issues with the shoes support . Soles is very flat and stayed flat when I played in them . The huge super studd heel counter does its job but imo is overkill but I guess it makes the shoe unique. The stiffness of the upper also adds to the support although with more wear I suspect the upper will be more and more flexible and the support will deteriorate but not to a point where it bad.

I really wish Nike would have stepped it up with this sig shoe from the getgo rather than taking baby steps and giving the consumer an average shoe for a spectacular player. Shouldn’t the shoe reflect the player? That’s what a sig shoe is isn’t it ? Kyrie is by no means average and is one of the most entertaining players to watch but you wouldn’t know it if you wore this shoe. Sure it’s unique looking and polarizing but I don’t think looks should define a shoe especially on the court. If you love Kyrie you’ll love this shoe no matter what but if you’re looking for a great hoops shoe look elsewhere . So many options exist at or around the $110 price point that blow these away performance wise including the UA Clutchfit drive , the Hyperrev 2015, and even the Hyperdunk 2013 which can be found at outlets for $69 or less.