Got Socks? A Defintive Guide 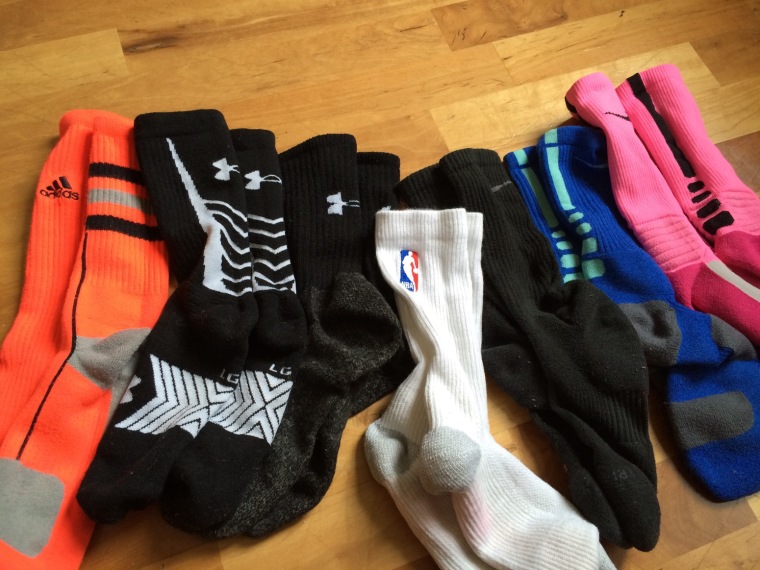 We can all thank Nike for the current trend of “performance socks” and nosebleed prices. It all started with the Nike Elite socks back a few years back and has snowballed into the highest margin product in footwear history. How much does it cost to make a  regular sock ? Maybe fifty cents to a dollar ? A premium sock probably costs $2 to $4 due to the patterns and extra materials. Per usual the Athletics industry is a monkey see monkey do business and all the other companies have followed suit with their own takes on performance socks.  Being the sucker and curious person I am, I’ve done a quick run down on a few of the socks out there.  Note to the NBA, Adidas and Under Armour, you’re over valuing your brand and pricing yourself out of the market.

Keep in mind these don’t include player branded socks like Lebron, KD, Rose, or Curry which adds another $3 to $5 bucks. Nor does in include special edition prints which can run $30 a pair . Did I really just say that ? You can find all of these socks at discount stores like Ross and TJ maxx for $6.99 ish prices so go on and be a maxxanista and head over there.

Here is a shot of the rear graphics: left to right : UA performance, nike Drifit, NBA court speed, Adidas Climacool , UA undeniable , nike elite, Nike hyper elite . Note that the Nike Drifit and NBA court speed only have logos on the side which shows they are truly not high end socks (sarcasm)

As you can see, high retail prices and high margins is why everyone has jumped on the sock bandwagon. Does it make a difference? Not really unless you have a pair of socks that slides around inside your shoe but those days are pretty much gone as companies have figured out how to moisture wick and stick at the same time. I will say the added thickness does help a little bit with filling dead space.

From thinnest to thickest

Here are some shots of the socks inside out. 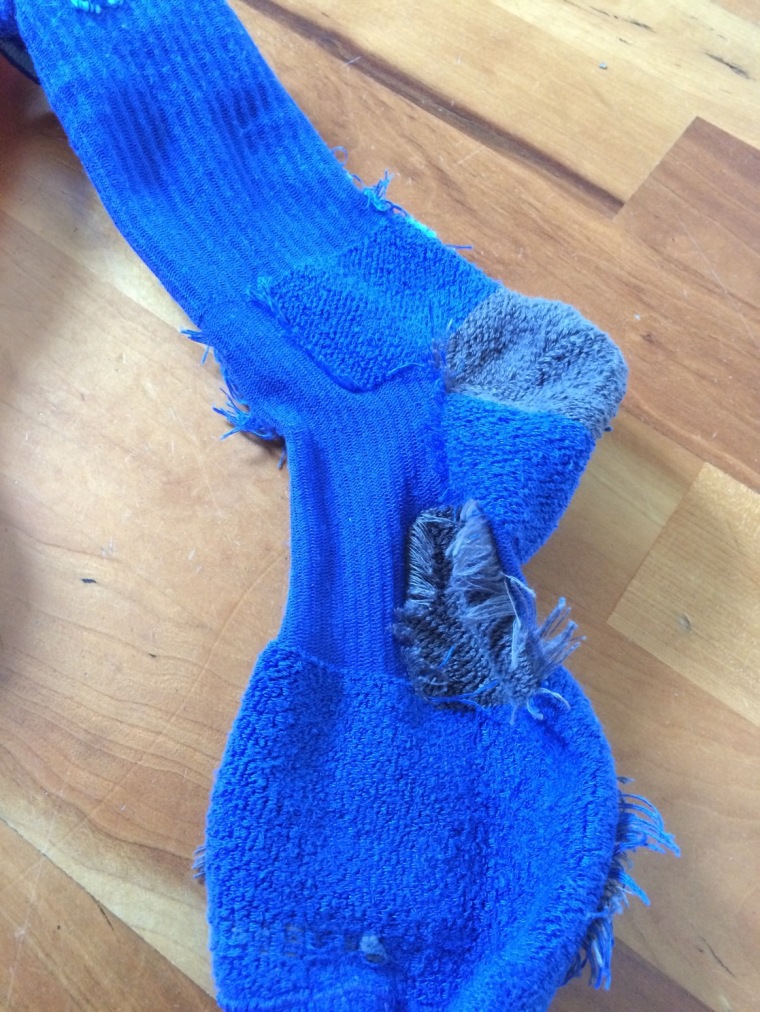 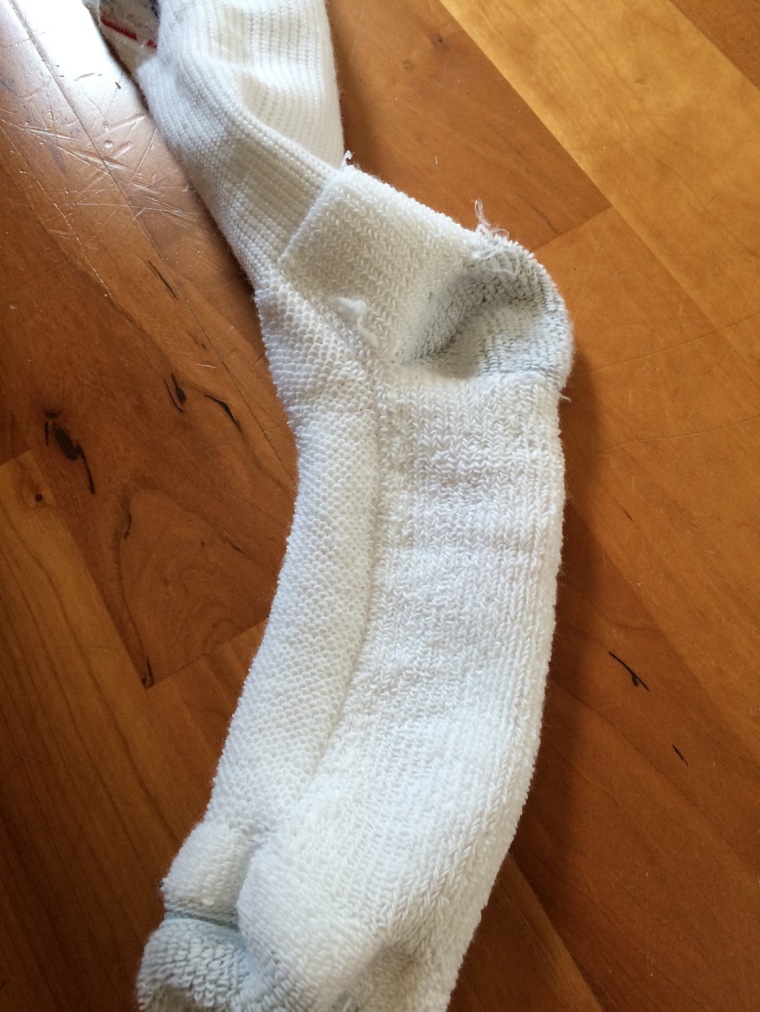 Least to most compression

I could wear UA Performance socks all day they don’t constrict at all and are very thin. I also really enjoy playing in the NBA Court Speed since its a nice balance of thickness and compression. The UA Undeniable feels almost exactly the same as the Elites while the Hyper Elites compress the calf more than the regular Elites.  I like the Hyper Elites but not to the point where I’d pay a premium over the regular ones. I feel like the compression is overdone but acceptable. The Hyper Elites seem stiffer overall for some reason even after washing.

Here are some shots on foot .

Most come up about mid calf 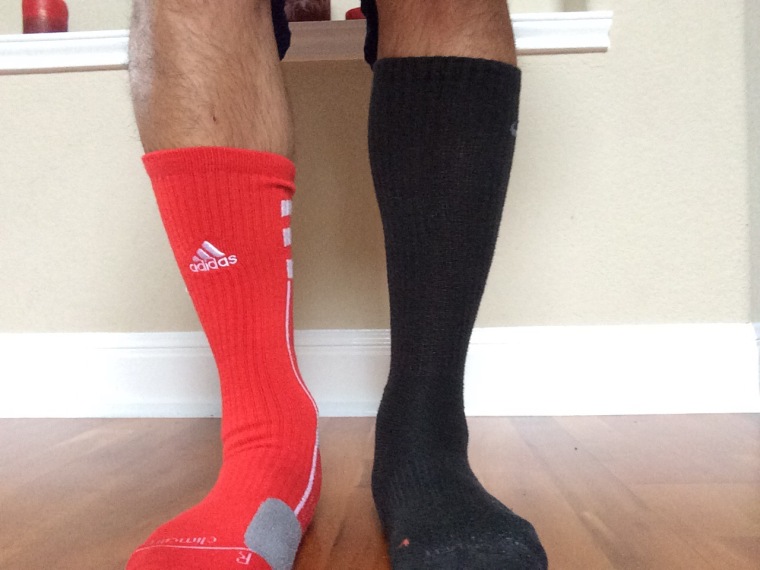 DURABILITY FROM WORST TO BEST

How did I determine this ? Easy, I have holes and rips in them already .  I poked a hole in the UA Performance and tore part of the heel putting them on and poked a hole in two of my Adidas Climalite. I have yet to make a dent in any of the top three most durable.

Not really a big deal but bothersome is the consistency of the Adidas Climacool/ d Rose sock.  I have at least six or seven pair and two or three pair that are a few inches longer than the others. They pull up almost to my knees while the others go past mid calf . Most disturbing is when the length is in the foot /heel and the heel pad sits at the back of my achilles rather than under my heel like it should. If you’re going to charge premium prices, at least be consistent Adidas. 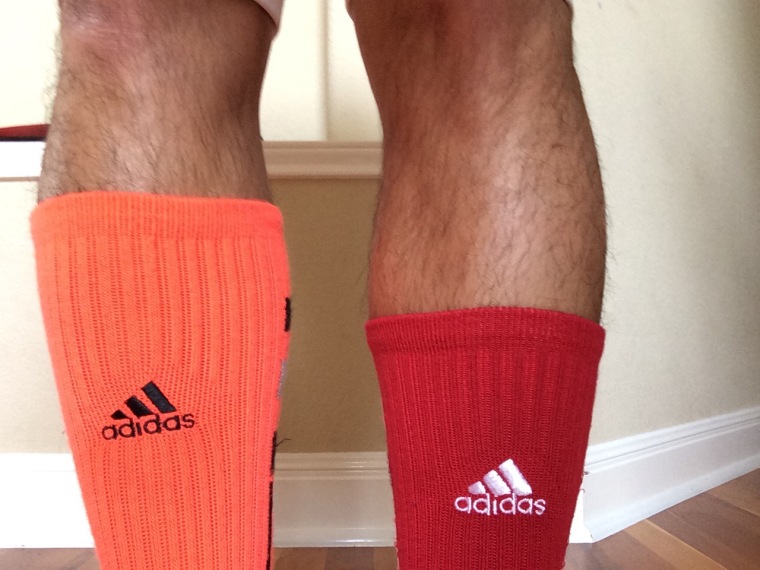 Both are larges pulled up normally

See the nipple coming out my achilles ?! That’s the heel pad.

Is a $15 dollar pair of socks going to help me drop 30 points ? No, neither will a pair of $200 kicks but that’s neither here nor there.  There are slight differences between the different brands.  I enjoy wearing all of them but for different reasons.

All the socks above feature “arch support” but it really isn’t enough compression around the arch to make a difference.

Back to my point of Adidas, the NBA and UA pricing themselves out of the market. The only reason for these companies to price their socks the exact same price as Nike, the King of market share and brand equity by a chasm, is to make the consumer think they are equally as good.  However, why in the world would I buy a $15 sock that I have never tried vs buying the tried and true that I already know or that everyone else is wearing ? Only a curious consumer like myself would even think to try another brand and I only did so because  they were over 50% off retail.  If the retail price of the socks were $10.99 or $9.99 consumers would know it’s a premium sock and be more inclined to buy them since they are cheaper than Nike Elites or HyperElites. How many people have you seen wearing anything other than Elites or generic white Walmart socks? Just my .02 to Adidas, UA, and the NBA.