Every year I go through a shoe closet purge and this year I decided to sell everything AJ XIV and up. I forgot I even had these so I decided to jog my memory about why I just stuffed them away in the closet.

If you didn’t know already, the XX1 design is based on the Bentley Continental GT Coupe. An ultra sexy coupe that hides its power, speed, and sportscar DNA in a timeless, slightly rotund design. Jordan Brand wanted to emulate that idea with the XX1 and you can actually see some of the similarities in the design. Although it might be inspired by a Bentley, it doesn’t quite live up to its automobile counterpart on court.

Best for: bigger guards to bigs

Weight: 17 ounces which is heavier than most shoes today by 2 ounces or so.

The XX1 uses a dual depth DNA helix inspired pattern and does a very good job on all court conditions but aren’t in my top patterns of all time. I remember Professor K saying that the traction was amazing and they are very good but I think they are just short of top tier. Some wiping is needed like most shoes and the bite is pretty good, much along the lines of the 2K5. Still a very good pattern overall though.

If you ever wondered when Jordan Brand and started skimping, it was around 2005/2006. I actually started to STOP collecting Jordans in 2006 because of the crap quality in the Mars and Military IV’s. The JB skimping didn’t really affect Jordan’s sig line but take a peep at the pics and you can see JB used some half dollar sized Zoom and Max air bags. Modularity is cool but not at the expense of cushioning. 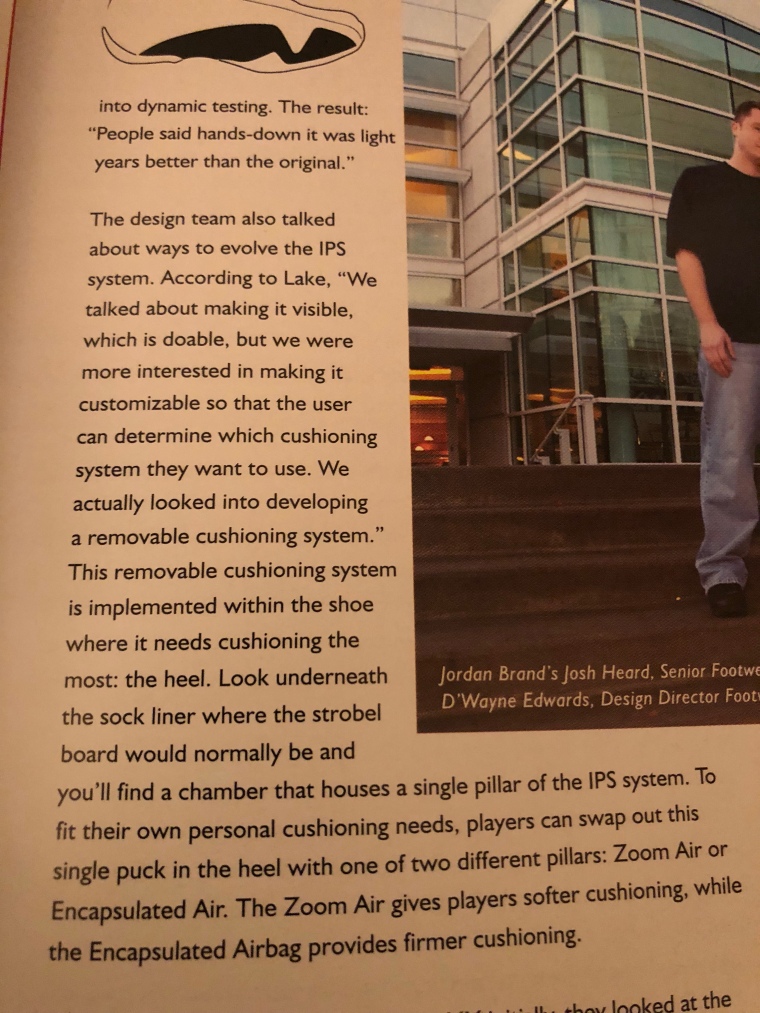 Which one is it JB, Forefoot or Heel? Nike and JB switch their stance on cushioning based on the shoe and player not on actual facts.

When you put such a tiny unit in a shoe, it is targeted cushioning to fault. You can feel a slight different between the Max and Zoom units but a lot of the impact is absorbed by the foam of the pod and around the heel not that tiny surface area of the Pod. I’m not sure what this surrounding foam is but it really firm to the touch. I’m sure it’s firmed up in the past twelve years because I don’t remember it feeling so distinctly stiff around the pod.

Aside from the modular pods in the heel, the forefoot is IPS like in the XX. The idea behind IPS is to use different density Phylon across the forefoot for optimal performance. Sounds great but I honestly couldn’t tell a difference between the pods and it just felt like a decent one piece foam to me.

Overall, cushioning is okay. Some decent forefoot feel with some ultra targeted heel cushioning that has modularity as its prime marketing element. Put in a normal sized heel Zoom and it would have really made the cushioning a lot better. 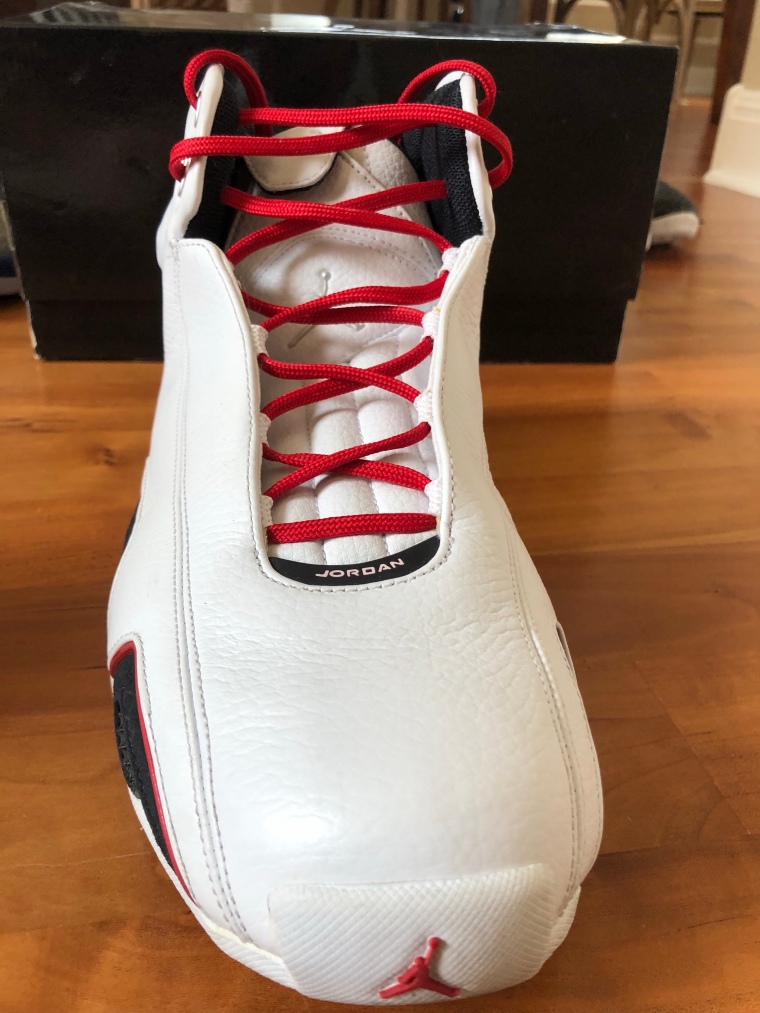 These run normal to slightly large for the era and I went with my then normal 10.5. The overall fit is good but there is some movement in the forefoot on hard cuts and stops. Double socking helps cut down on that interior sliding but it never really went away for me. I could have sized down but then I’d have no space in the forefoot. No issues at all with heel slippage at least. I also highly recommend double or triple knotting because these laces just want to untie themselves.

Very nice leather especially considering the junk they stuck on the retro IV’s and V’s. The leather starts off pretty stiff but breaks in like any leather should.

The downside to the XX1’s expansive use of leather is zero breath ability. JB put these little vents on both the lateral and medial side but guess what, most of the vents are covered by the insole.

The most luxurious part of the XX1 is actually the lining inside the shoe.

It’s supposed to based on the stitching found on luxury car interiors so it looks and feels great to the touch.

I’m not big on materials from a performance perspective but these materials feel and look very premium.

Yep, believe it or not shoes used to have some extra support. There is plenty of flexibility for dorsiflexion in the XX1 and a good amount of support side to side without being overdone. It reminds me a lot of the Rose 5 support set up which is a near perfect blend of flexibility and support.

Adding to the overall support of the shoe is this large carbon fiber shank. It caused some irritation to my arches in the beginning but went away over time as my foot got use to it. 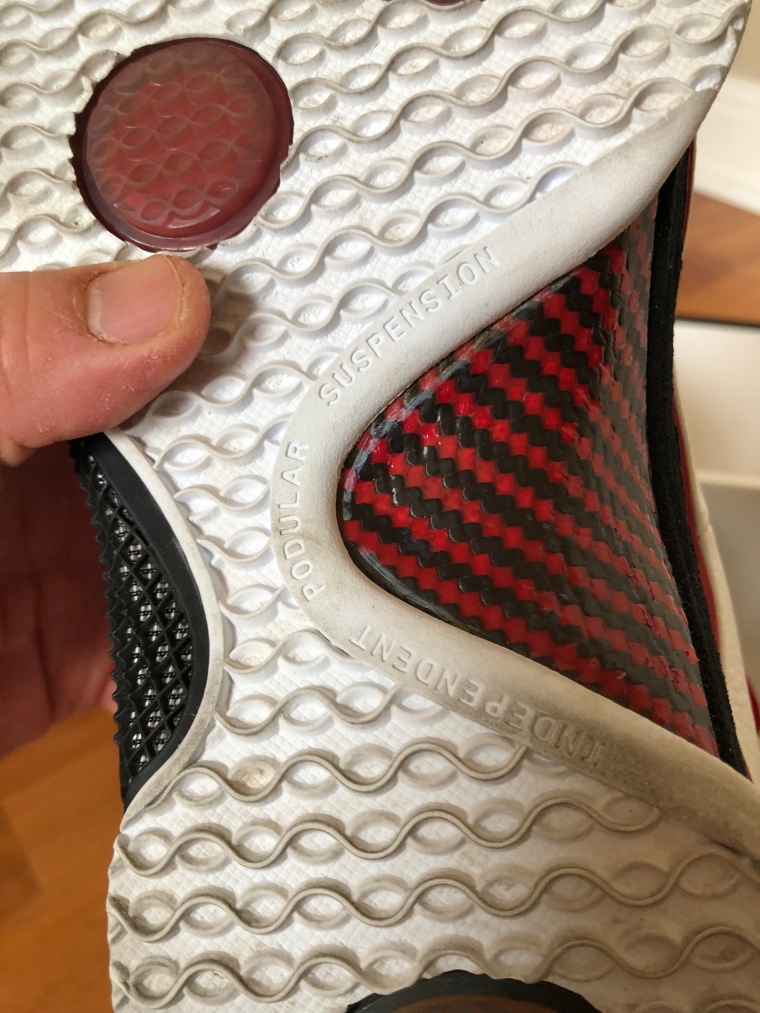 Stability is excellent thanks to a low profile cushioning set up as well as a very wide flat outsole. 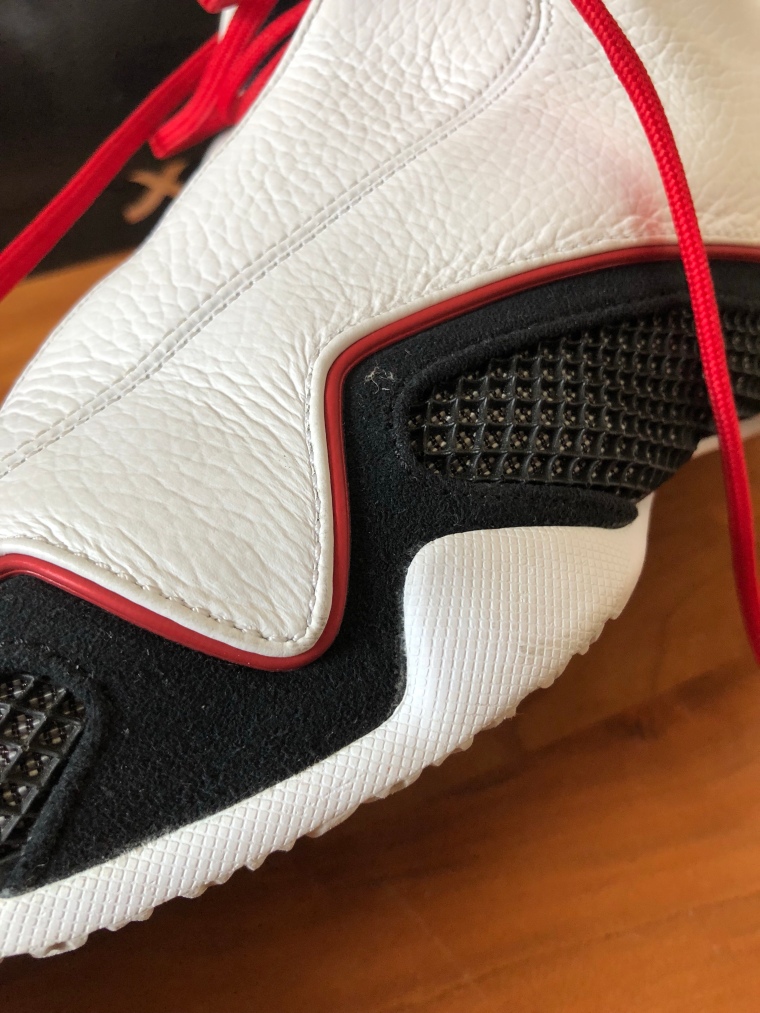 No issues at all with containment. Leather is much stiffer than today’s knits but add in the raised outsole plus the plastic vents and you have a lot of lateral stability. 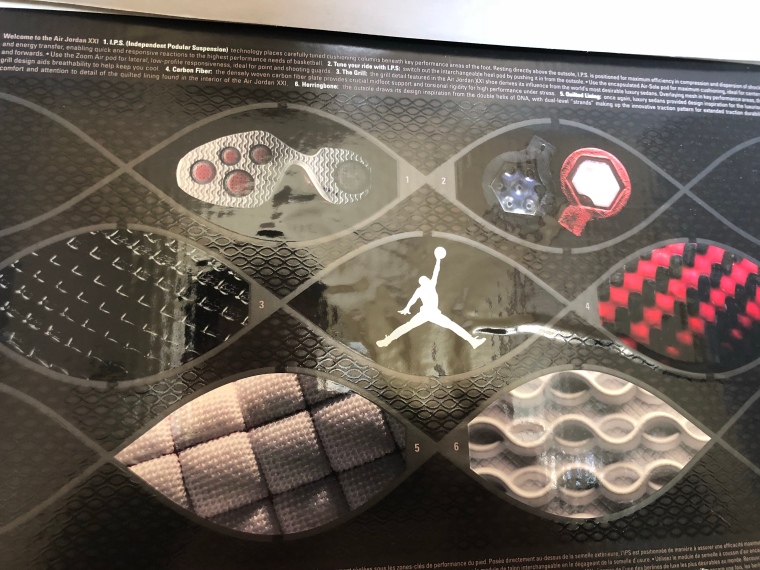 Just look at all this tech speak JB put in the box label. With this much tech, the shoe must be amazing right ?!

Marketing materials and tech are great but how a shoe actually plays means more to me than what a box says. I never really fell in love with the XX1 due to the underwhelming cushioning and somewhat sloppy fit in the forefoot, not to mention the stiff start and heat retention. Somewhat clunky is a succinct way to describe how it plays.

Did all these “issues” make a difference in my play? No, not really but it just wasn’t the most pleasant experience to play in the XX1 even back in 2006. The Kobe I came out the same year and had a much more simplistic basic design yet easily outperformed the XX1 and has been in my rotation ever since. The takeaway lesson from the XX1 ? More tech speak doesn’t mean better. This goes across all products, not just shoes.

The XX1 was a decent effort by JB and I still like how the shoe looks even though it performs more like a Kia Optima than a Continental GT. But if you’re looking for a great older shoe to play in, look elsewhere.