These are just plain  FUN-tastic.

It’s very rare that I try a pair of shoes and say wow. Usually I play in shoes for a few weeks to allow for some break in time but these were so fun and so good right out the box that it didn’t take long to come up with a verdict on these after one week with them. I preordered them and tommy surprise they came early.
Last year I bought the CL Boost and was disappointed by the inconsistent traction and the lack of any sort of cushioning in the forefoot; They felt like my foot was touching the sole of the shoe. I really wanted to love the shoe bc I loved the design and look of the Lillard PE but just couldn’t with those serious flaws.

Adidas redesigned the CL Boost  with a new traction pattern, Primeknit upper, and a new silhouette that resembles the DLillard 1. Sounds like a plan to me…

This maybe the best traction I’ve ever had on an Adidas shoe.
Adidas used a semi herringbone/mini traction blades (ala J crossover 2)  with micro blades on the outermost regions (ala Lillard 1) while using a super soft pliable rubber. The result is fantastic traction on any court

I didn’t slip at all on court at the Y or 24 which we all know are ultra dusty. Clean courts these stuck like glue. They didn’t squeak to start but after break in they did but not 24/7 like the Kobe IX. These are at least as good as the Kobe 8 and maybe as good as Kobe IX… I’ll keep you updated.

I didn’t play outdoors in these I’d recommend not doing so since they will wear down quickly and the grooves aren’t  very deep.

Boost in the heel only was a let down but the cushioning in the forefoot is miles better than last year and is very good overall with just enough response to let you know it’s there. The transition from Boost in the heel to foam is surpringly good. It feels almost  like the Rose 5’s forefoot set up but little less responsive and lower to the ground. These play about as low as the Kobe 8 FYI

The insole of the shoe is very thin like the Rose 5 So being the Einstein I am, I put the Rose 4 insoles into the CL Boost Pk voilà, a damn good cushioning set up without Boost in the forefoot. Sure it gives up a little court feel but I can deal with 1-2 mm more of height to get a better cushioning set up for my achy knees.

Boost in the heel actually feels better than in the Rose 5 and I have no idea why. It really feels like the Boost in my Energy 2m. Boost makes everything else just feel dead even Zoom and Micro G.

According to their marketing it has 15% more Boost . 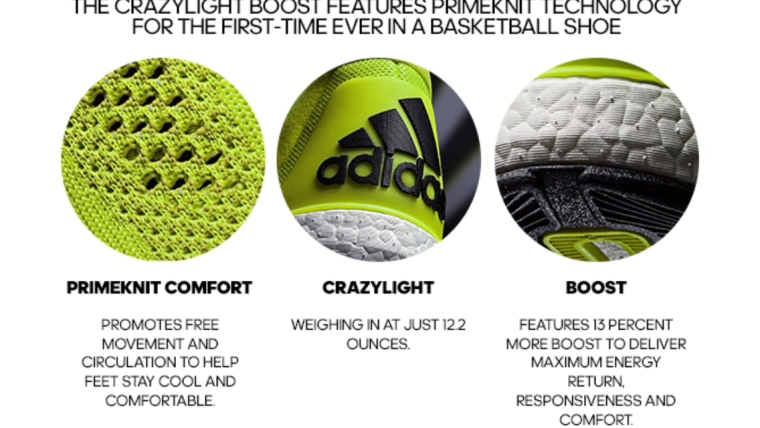 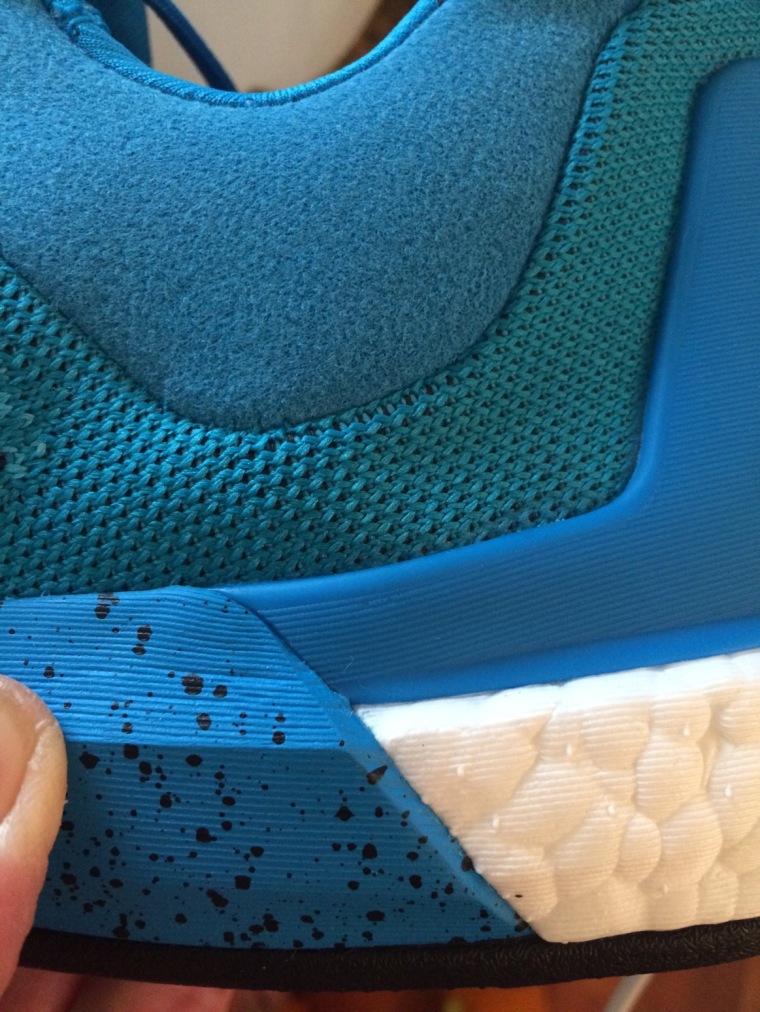 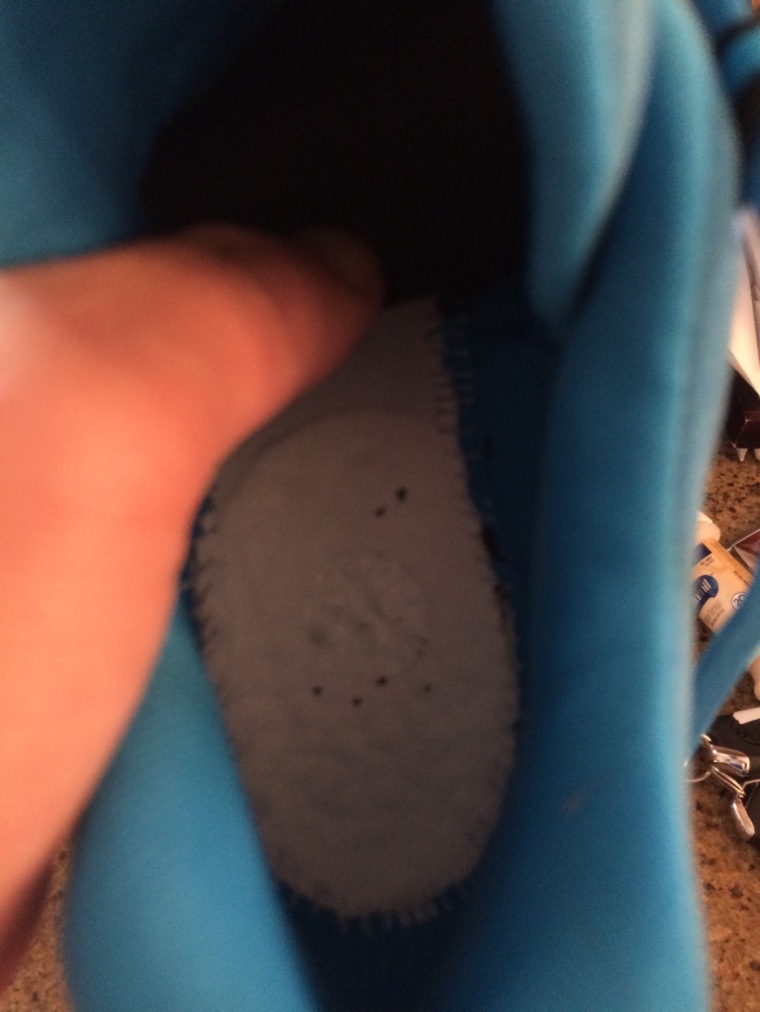 Boost runs from heel to about the last lace loop.

I do hope they add Boost to the forefoot next year like the Response Boost. Keeps costs a little lower feels almost as good as full length Boost.

Copying the silloute of one of the sloppiest fitting shoes I’ve tried in some time worried me but after wearing the CLBPK my worries were laid to rest and it gives me hope for the Lillard 2. The problem with the Lillard 1 was the lack of any form fitting in the heel. It was just a thin neoprene layer inside a synthetic leather layer with a soft internal heel counter

Below: see how sparse the Lillard looks compared to the CLBPK 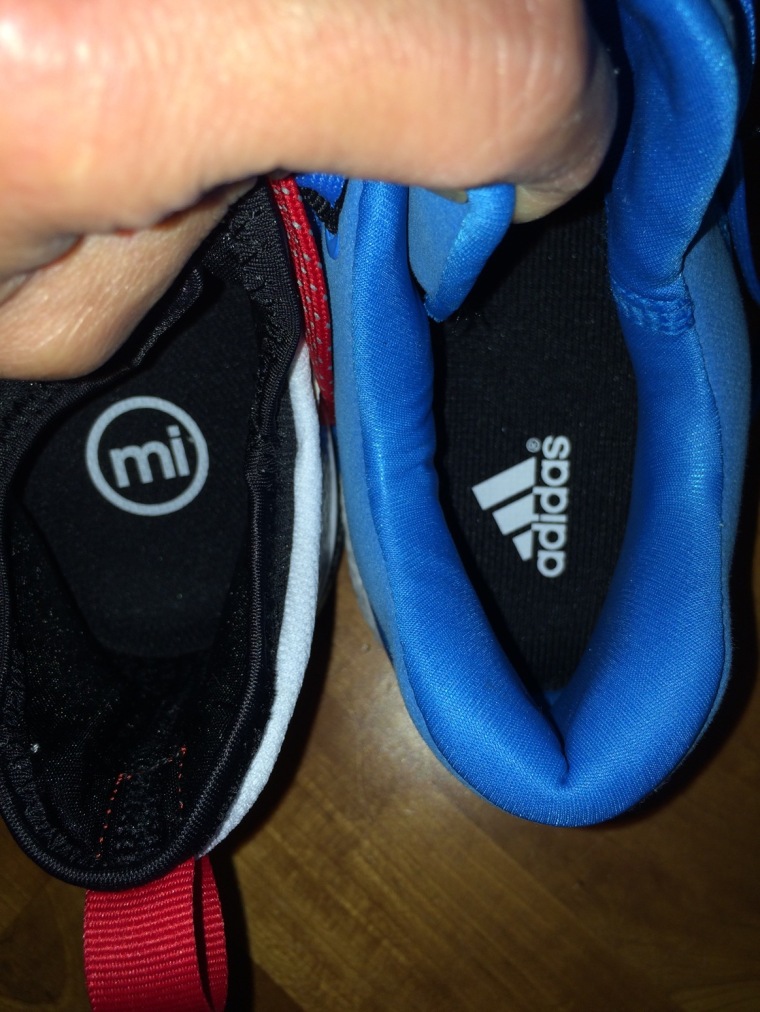 The CLBPK remedied this with a plush ankle collar and a stiff external heel counter. The result is very good lockdown in the heel. Heel slip is usually a killer for me especially in lows but these did a great job. It does take a few wears to get it to lock in but the slippage is minimal to start.

Of course I can’t forget the rest of the shoe.

The Primeknit upper feels like more Nike’s Flyknit than Flyweave and it doesn’t disappoint. It requires zero break in time and conforms to your foot once laced up. There is some deadspace at the forefoot as you can see but it  isn’t out of the ordinary nor does it affect performance. I think the j XX9 and jCrossover had a better fit overall but these do a great job as well. Woven uppers are ultra comfortable and I think manufacturers are figuring out ways to enhance support while keeping comfort and fit top notch.

Yes airflow is great on these.
The tongue is sewn into the ankle collar on the lateral side to give a more connected one piece feel and of course no tongue slippage

I’m always worried about support with woven uppers but the CLBPK fit and stability are excellent so I don’t need to worry to much about the support.
Here is a shot of the large stiff external heel counter that replaced last year’s flimsy one. 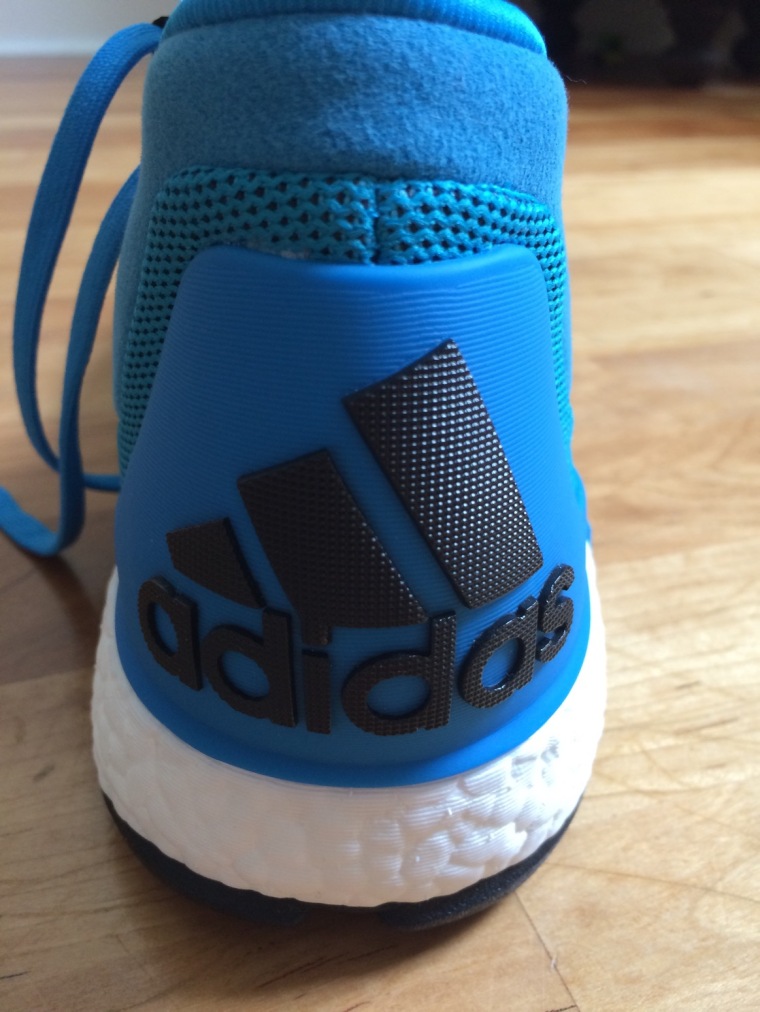 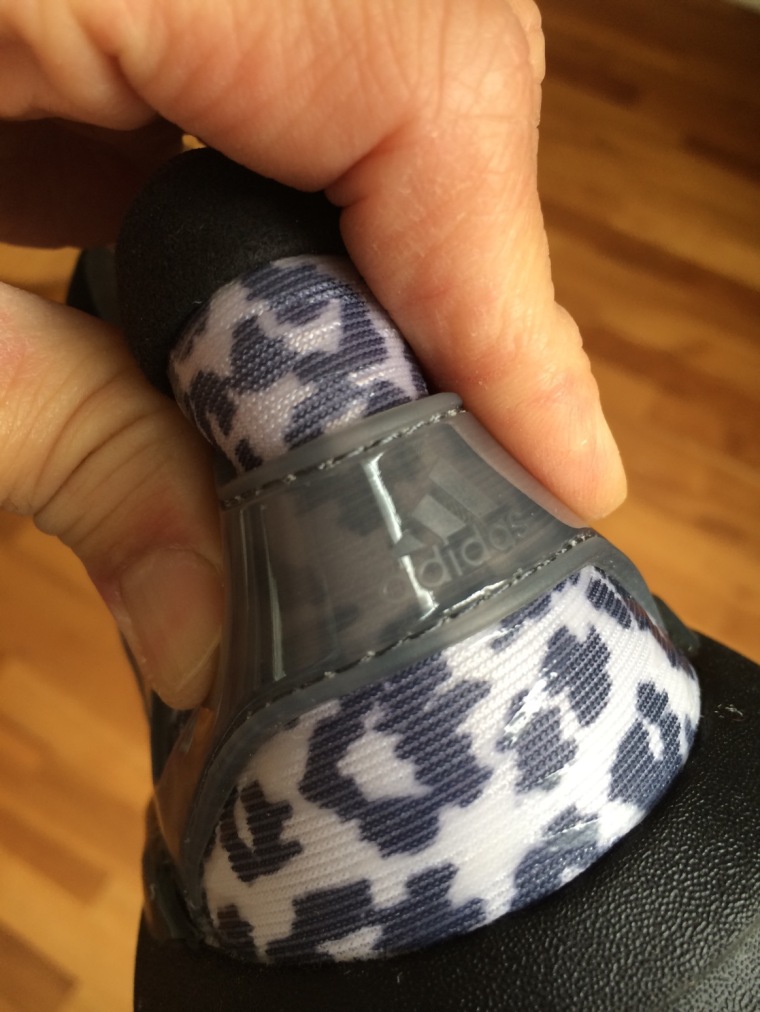 There is also a tiny plastic shank. I didn’t really notice it was there quite frankly.

The CLB2 is very stable at the heel since there is no curvature and passed my heel test with zero tipping.

The forefoot does not have an outrigger but remains very stable and plays low to the ground.

What’s weird is that when my entire foot is flat on the ground, it feels tippy and I don’t know why. I have not hurt myself in them and I doubt I will bc when is your foot ever dead flat on the ground ? I guess the sole at midfoot is narrower than the forefoot and heel ? It’s the only thing I could think of.

Containment has been a deal breaker for me on woven shoes like the Aj XX9 and J Crossover 2 but Adidas did a great job reinforcing the upper in just the right places.

Below: foot comes out slightly when pushed hard from a static position

Rose 5 doesn’t come out at all. 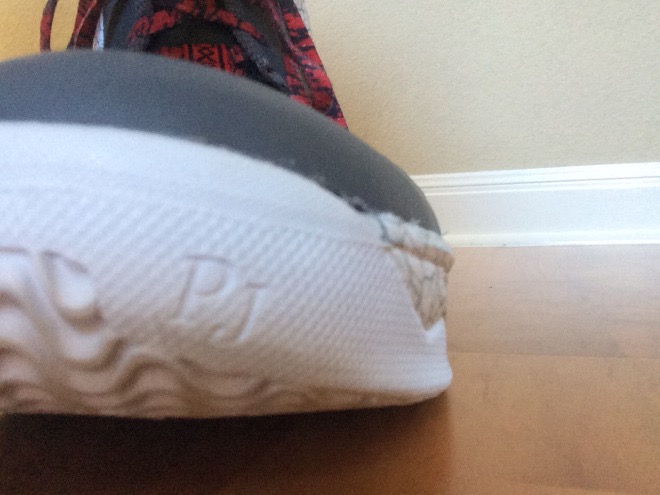 Containment isn’t Rose 5, Lebron Soldier level but it’s pretty good especially for a woven upper. There is a little give but I didn’t feel my foot come out of the footbed like the J Crossover 2.

Glue/paint and fuse on the inside provide extra support around the entire toe box.

The nylon lace loops double as “Flystraps” in a sense. Since they are thicker than Flywire they hold the foot in better.  Think of it this way, Would you rather be strapped in with a seat belt or two pieces of string ? The wider the strap, the better the lockdown since there is more surface area to distribute the forces and hold the foot in while with two pieces of Flywire you just have your skin go through the gap. Probably why the safety commission doesn’t use recommend Flywire  either…

The lace loops run on both the lateral and medial side and are sewn into the upper and therefore not dynamic which I believe is a good thing .The fewer things moving around the better IMO.

Another reason these contained my foot well is because of an extra layer of fuselike material along the base of the shoe. It is the same material that runs along the “Flystraps”

Above: the denser blue along the insole runs about 3 mm above the midsole right where my finger is in pic below and runs around the entire shoe.

Essentially you have a fuse skeleton running inside the entire shoe up along the lace straps and around the base and along the laces or if you’re looking at the outside of the shoe, anywhere that has the tighter denser  weave. Great job Adidas ! 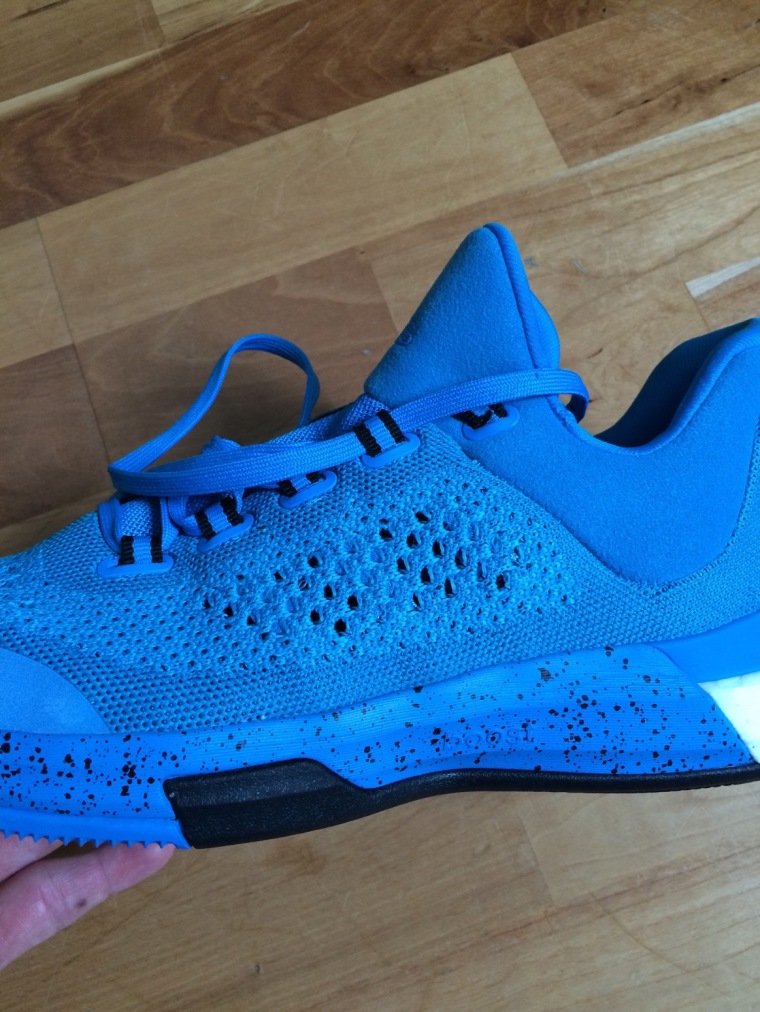 I’ll just outright say it, this is the most fun low top I have played in.

Why so blue ? The CLBP are as close to feeling like running shoes as I’ve ever felt. 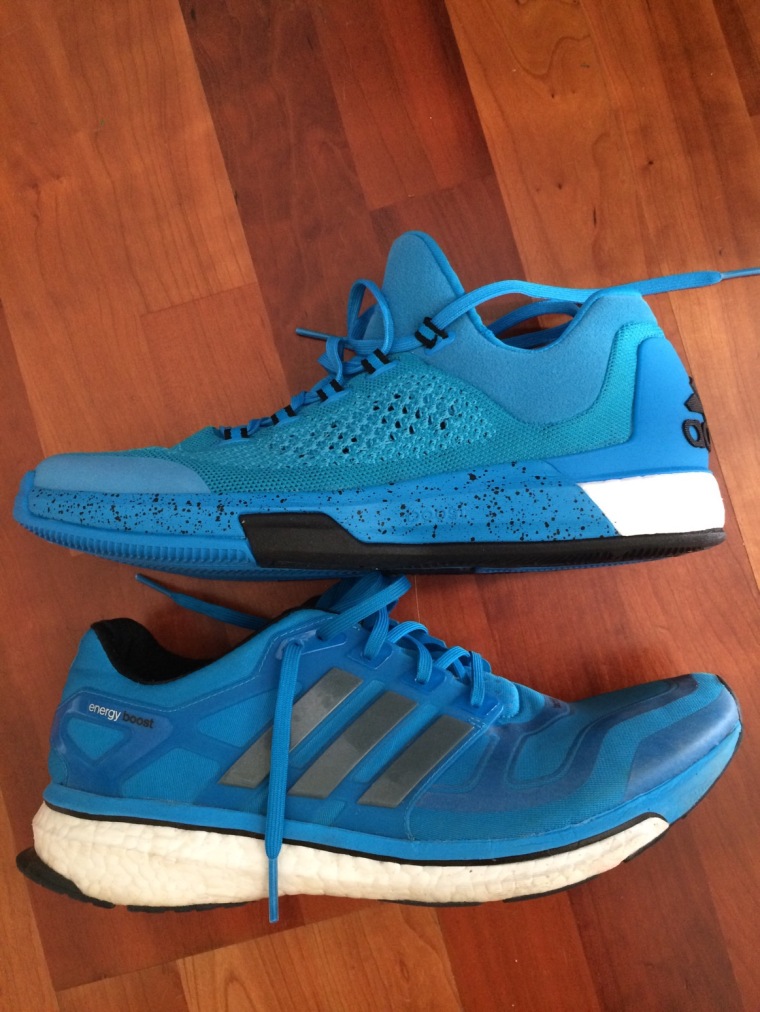 It excels at everything which pleasantly surprised me due to my history with lows and with  woven uppers. I don’t really like playing in lows at all but these are just plain fun. Adidas improved the weaknesses on last year’s model and really nailed it this year.  I’d personally like more containment but everything else about it is excellent. Usually I don’t gravitate towards minimal shoes like this but damn it is fun to play in. I’d recommend these for players that like minimal uppers (small quick guards typically). The price point of $130 is lower than Brandblacks J Crossover and the Xx9 and is one of the few shoes outside of collection purposes that I would pay full retail for. If you’re patient, prices will fall into the sub 100 then sub 75 range in a few months bc Adidas’ brand just isn’t very strong in bball and the U.S. .  I do hope Adidas’ newfound attention to the basketball market and U.S. continues bc they have made huge strides in their shoes this past year especially with Boost. Keep it up Adidas!