It’s funny how the XIII Elite model costs the same as the non elite isn’t it? Wouldn’t it be nice if shoe companies would just give us the good goods the first time around ? That will never happen so oh well, onto the review

Pros: much lighter without sacrificing support, traction, cushioning, support and stability, containment, Posite was removed including the stupid middle piece

Cons: Hex Zoom takes time to get used to, would have preferred regular large forefoot Zoom, one piece upper leads to some bunchiness around tongue, upper is same thickness around entire shoe and needs some break in, sum of the parts not as great as indivual scores

Sizing: true to size, half size down for narrow footers

Here is my XIII comparison from last year

King of the court
Weight:

13 ounces for a Lebron shoe is nuts. The regular XIII was 16 oz.

Exactly the same as the non elite. Great on all surfaces including dusty floors although wiping is still needed. Don’t judge a shoe’s traction based on translucency.

Translucent outsoles can work great depending on how the pattern is set up and Nike did a great job on these.

Five hex pods  in the forefoot versus three with the non elite. I can’t really feel them because they are so far forward in the toe and they are the small  Zoom pods but at least they are there. They might help with push off but it is really is minimal.

You can actually feel the Zoom in the forefoot since Nike increased the volume in the medial forefoot pod and the heel Zoom feels great just like the XIII.

Regarding how Hex Zoom feels, it takes a little time getting used to it. I still prefer a normal Zoom set up because the flexibility gained from the Hex set up isn’t all that much especially considering how much midsole there is.  Would you rather sleep on one plush bed or a bunch of pillows spaced evenly apart ? All the empty space between the Zoom pods and the protrusion from each pod could have been simplified with a standard forefoot Zoom set up.

I went true to size from Lebron X to XIII and these fit me perfectly just like the regular XIII. If you have narrow feet, I suggest half size down because I see it being difficult to get laces tightened properly with skinny feet.

The entire upper is now the same material and Nike dropped the Posite (thank goodness). I’ve never been a fan of Posite and the removal of it just makes the shoe feel more natural to me. No more stupid middle Posite piece either.

Kurim rubber is used on the entire upper.

It is just the name of the company that makes the rubber. (Makes it sound fancier doesn’t it? It’s like when you order fish at a restaurant and instead of catfish it says Blue Channel Mississippi Catfish). 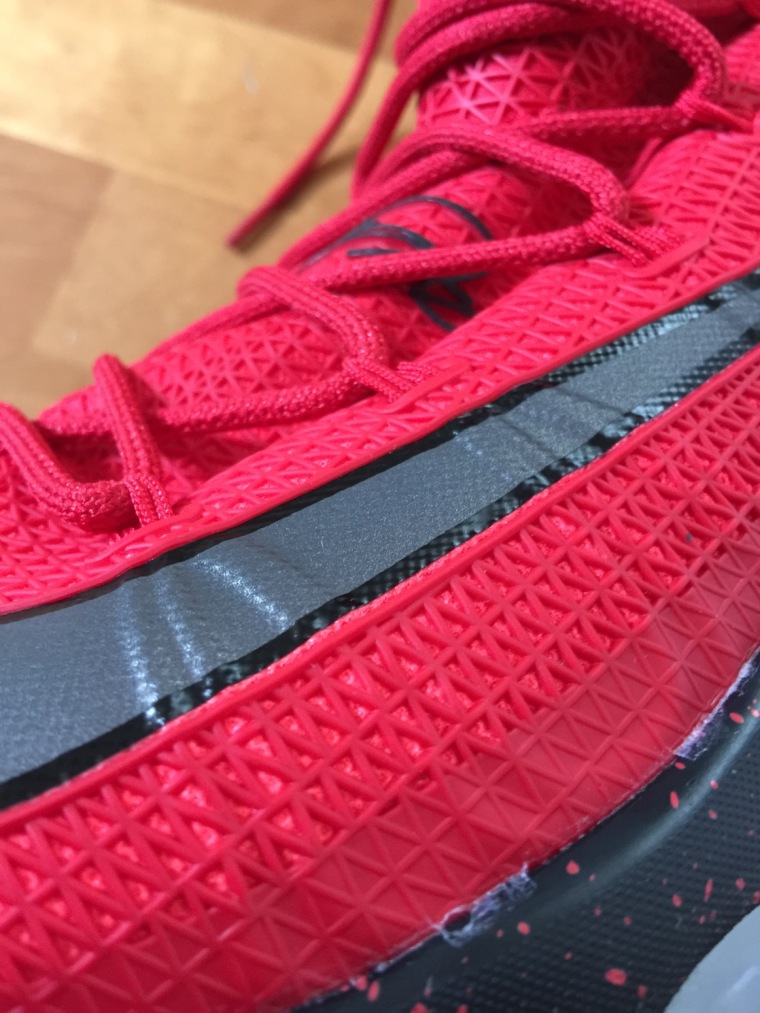 The Kurim cage sits on top of the upper so when it gets pushed or flexes it contains the foot. Very similar to UA’s Clutchfit upper in my opinion.

Above: Nike even put this weird material I’ve never seen before.. Must be from ancient times. Real leather is what I think they called in B.S. Times (Before Synthetic )

I think a combo of pure mesh and Kurim have been ideal.

The regular XIII had thinned out the mesh in high flex areas but the Elite is pretty much the same thickness throughout mid and forefoot. It doesn’t affect flexibility much but I know some people might not want to put in the time to break in a shoe. If you want a flexible, minimalist shoe, the LBJ line is not for you.  Material changes aside, I had no issues with fit, heel slippage, or movement side to side.

One other note. Being a one piece upper with no separate tongue, I still had weird folding along the tongue since my foot doesn’t fill the shoe to capacity. It isn’t a deal breaker at all but just an annoyance. I had similar issues with the regular XIII as well.

Always a strong point of the LBJ line, the Elite does a great job.

It’s been awhile since I’ve seen real carbon fiber used on a shoe so it is nice upgrade. As far as performance, it doesn’t change much so that’s why the past few years we’ve seen plastic but I think Nike really wanted to make the elite feel, well..elite.

No tippiness at all thanks to an outrigger and wide forefoot. 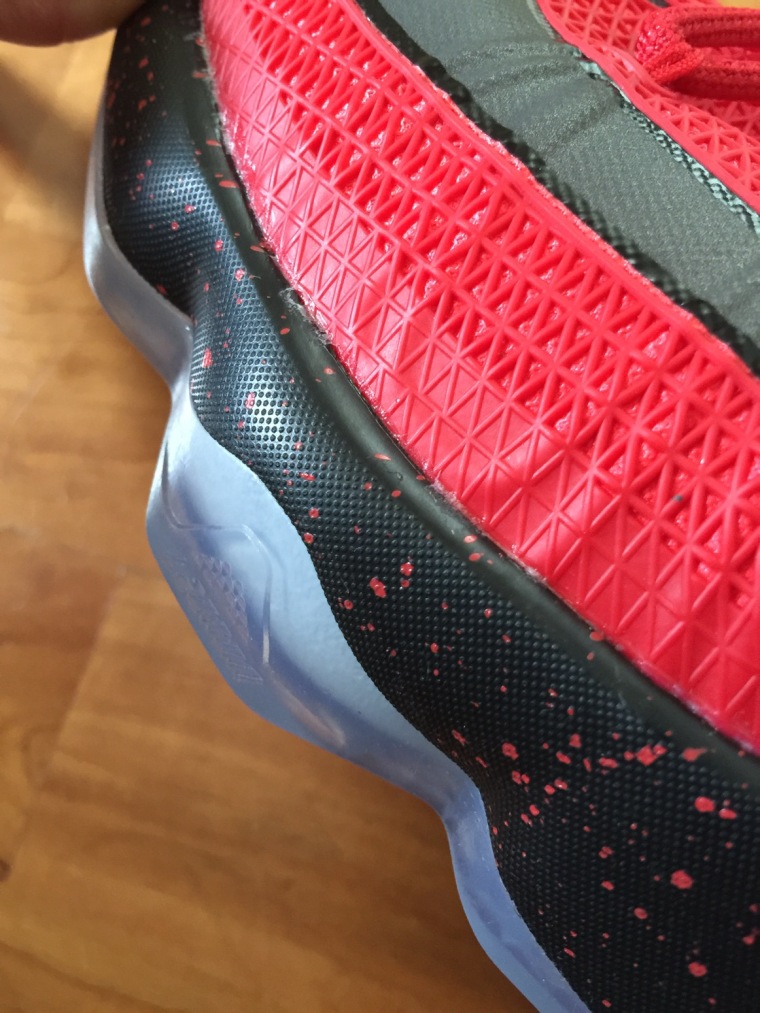 The XIII is cut really high.. As high as the Clutchfit Drive actually 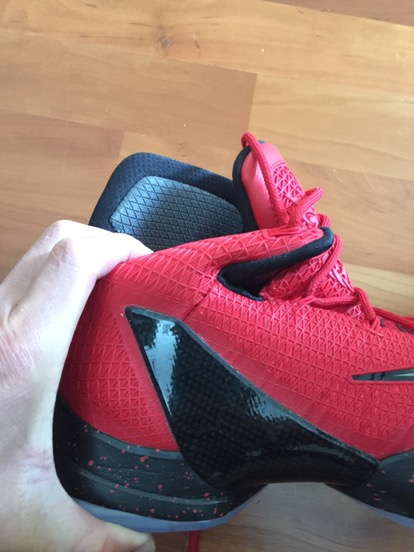 Another strength of the Lebron line has been its containment and these do a great job. Imagine Lebron trying to stop on a dime in a Kobe Flyknit upper. I’d imagine a 260 lb monster would rip right through it.

The upper and slightly raised midsole (and Flywire to a lesser extent) do a good job on hard cuts. You can clearly see the Flywire in the XIII elite upper. I don’t think these Flywire strands are Kevlar like the KD8 Elite so enjoy those lace holders known as Flywire.

Ice cream or ice cream with sprinkles for the same price. Pretty sure 99% of us would take the sprinkles. That’s what we have going on with the Elite series this year. No price changes but upgraded parts? Heck yea! I really don’t see any reason why anyone would choose the regular XIII over the Elites. Lighter without giving up support, more Zoom and better materials for the same price. Plus they look cleaner and simpler overall.  I think Nike is going away from price gouging and really trying to add value by upgrading materials yet keeping the prices the same. Kind of like getting real wood panels in a car versus plastic pieces. Even with the upgrades, I’ve already seen the Elite XIII for $160 already so be prepared for more price drops.

Regarding the shoe itself, the XIII overall is a great shoe especially when looking at each performance aspect but I can’t put my finger on why I don’t love the shoe more. I think  it does everything really well but nothing stands out to me to the point that I want to wear them all the time. Maybe it’s my long history with the Soldier VI but I’d still take it over the XIII. Maybe it has to do with what other shoes did really well this year? Rose 6, HR16 have exceptional cushioning, the Lillard 2 has fluid transition, fit and value, while the Curry Two has amazing traction, fit and stability.  The XIII probably would have stood out more in any other year. Regardless of my opinion,I’m sure many players love the XIII and I’m sure they’ll enjoy the Elite version just as much if not more.