Wilson X Basketball Review and comparison to the 94Fifty

A few weeks ago, I saw some basketball trainers and ex NBA players on Twitter with this new Wilson X ball so I was interested in what it was all about since it sounded a lot like the 94Fifty that I reviewed a few months ago with a similar price point of $199.
94Fifty Review Part 1
94fifty Review Part 2
However, upon getting the ball, the price is really the only thing that is comparable to the 94Fifty.  (I have a $25 off $169 coupon code bball25 if anyone wants to use it)

Pros: very well made ball, easy to use and pair to phone, battery life, no need for charging

Cons: only function is to track your shots, inaccurate, App modes are not robust/usability is limited, can’t hear anything even with phone on floor directly below me.

As a sneakerhead, I love a good box and the Wilson X box is awesome. 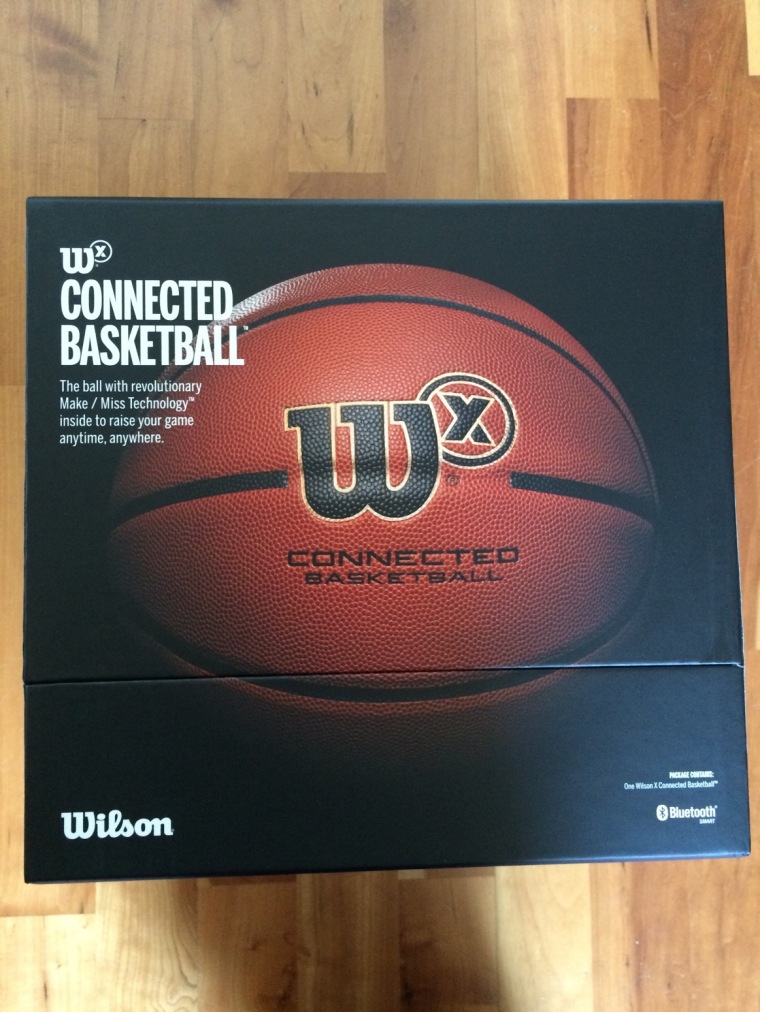 The Wilson X features a similar channel design as the Solution basketball. 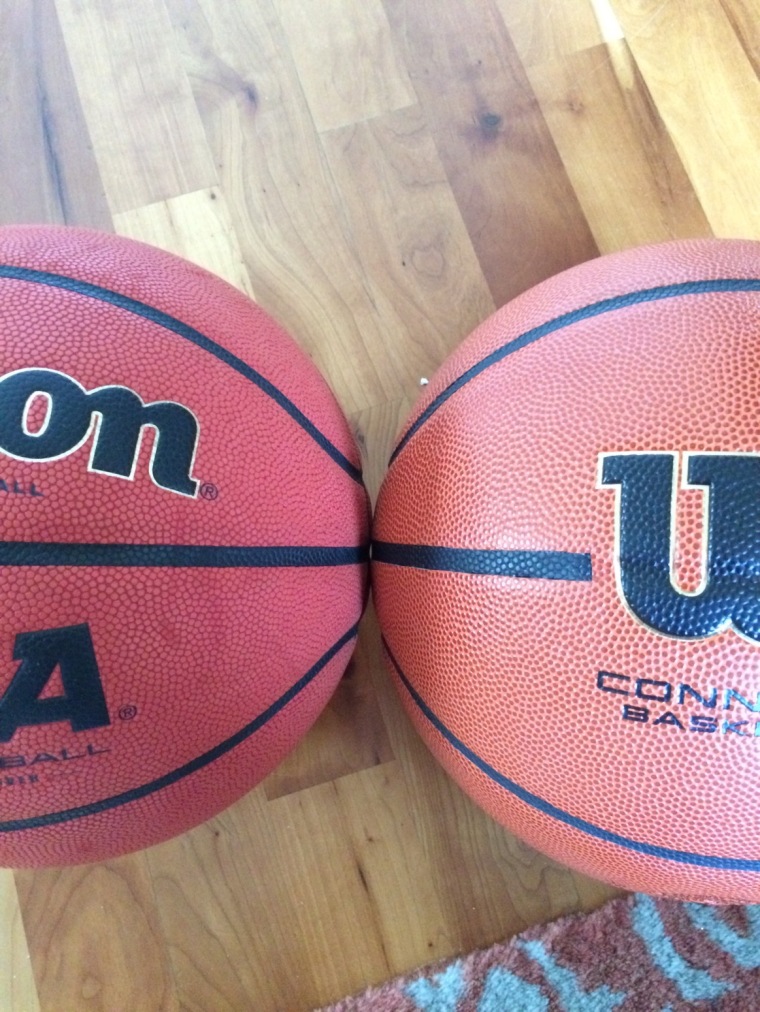 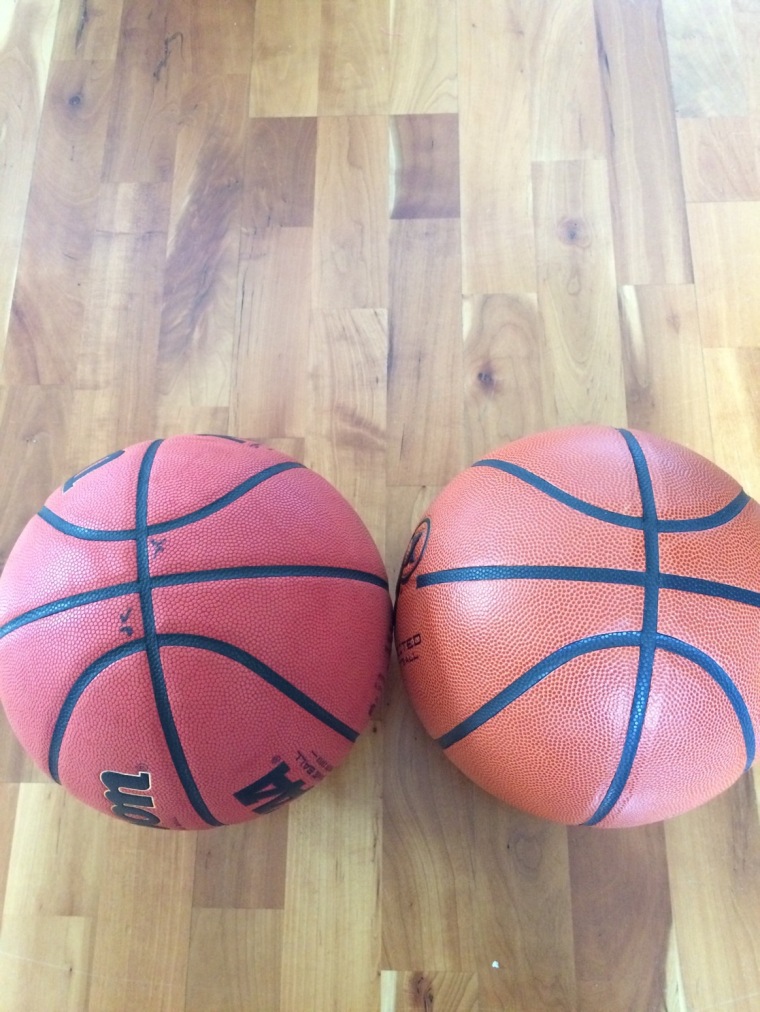 Very similar depth but slightly wider  channels on the X . No sloppy glue spots or spaces between the leather panels and channels.  Well done Wilson!

The cover of the ball feels almost exactly the same as the 94Fifty which feels like Spalding’s middle of the line balls such as the Zi/O indoor/outdoor ball with a similar amount of cushioning behind the panels. 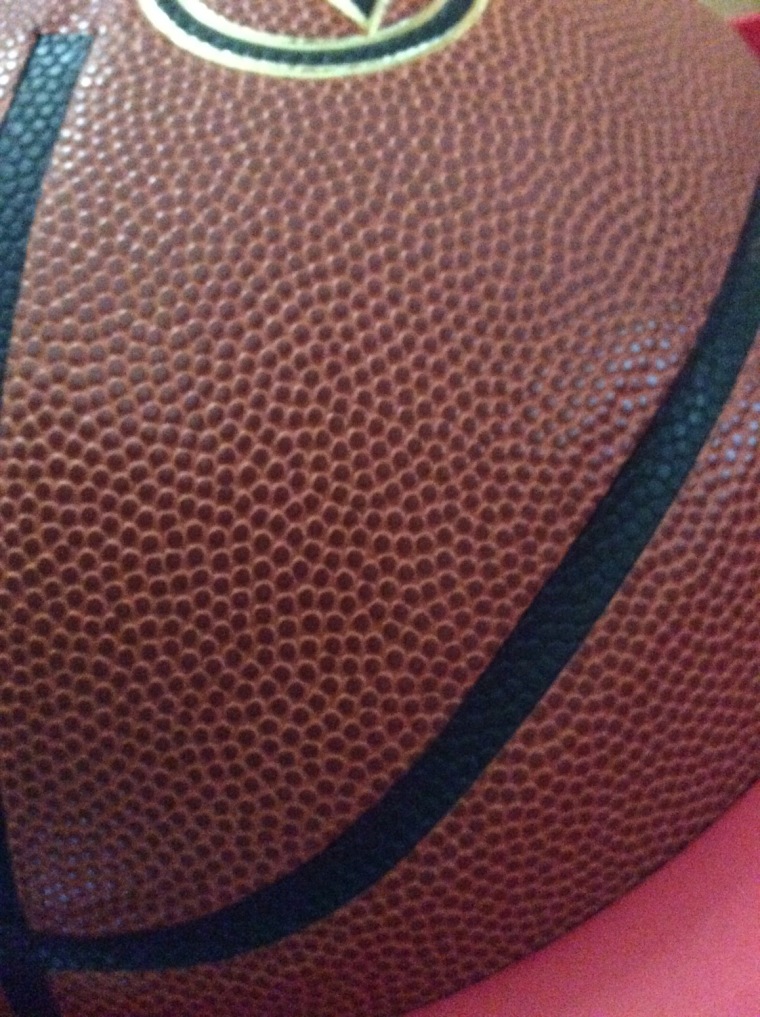 The cover does not feel as soft as or as cushioned as the Evolution.

All in all, the ball is tacky with a firm feel and wide channels.

Feel of the ball on court

Both the 94Fifty and Wilson X have Bluetooth sensors inside so it makes sense that they bounce and feel the same way. Both feel a little dead when bouncing the ball on the floor and feel like they use a harder or denser rubber (probably to protect the sensor) but feel fine when shooting.  Neither company recommends playing with the ball during a regular game since

A) there is a Bluetooth sensor. you want to wreck a 200 dollar ball as it careens into the backboard on a half court chuck?

B) can’t track your shots if everyone is touching and shooting the ball, thus defeating the purpose

Also worth noting is that the Wilson X does not have to be charged and is very easy to pair. Just turn on Bluetooth and spin the ball in the air about ten feet. Wilson states you can play every day for a year and not have the battery drain much. Wish my iphone had that battery.

The 94Fifty comes with a charger and is also very easy to pair just by bouncing the ball four times.

Ok so enough about the physical attributes of the ball, let’s see what these balls can really do to improve my game.

When searching for the App, search Wilson Basketball since Wilson X will not yield anything 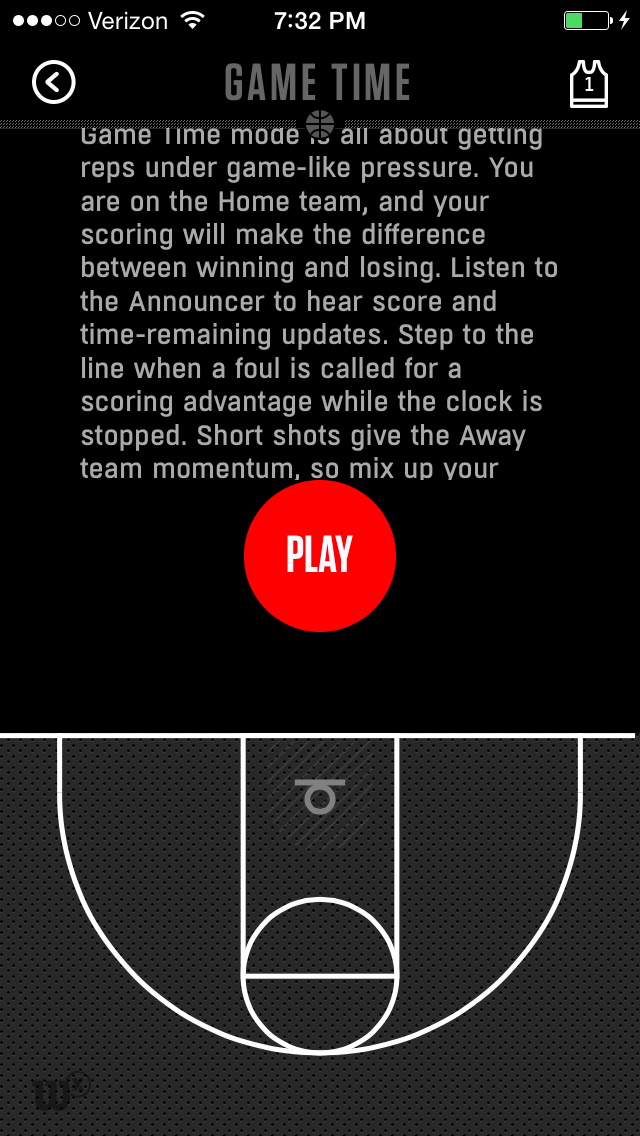 The app will track your progress each “session” you start so you can see your progression. A slight annoyance I noticed is that you have to toss and spin the ball each time you switch modes. After each session you can unlock “goals”.

The first two modes are self explanatory so I’ll expand on the last two:

The buzzer beater mode is a nice idea but if nothing is at stake, there really is no pressure. It’s just like going to the golf range and striping the ball all day because you can just take another ball with no consequence if you miss your target; If you miss, you just hit another ball or in the case of the Wilson X, do another buzzer beater.

The countdown starts at 15 seconds which is a long time but I guess you can start in the backcourt and work your way up? As I kid I counted down from ten or five when I played buzzer beater in my head  not fifteen so I prefer a shorter countdown.

As you make shots it all actually adds time back to the clock. I’m not sure what the ultimate goal is though. I guess it is to stay in the game as long as possible.

In the game time mode the score changes on the app to put pressure on you to simulate a “game time situation” but was a real waste of time because I couldn’t hear the score from my phone nor could I hear the announcer.  Since I couldn’t hear them I had to look at my phone to see what was going on with the score. The main goal was to try to create a pressure situation and make shots to help your team win. This mode just felt plain silly to me   A better way to apply pressure would be to make ten straight to move on to another level  or start over.

As you can see the main purpose of this ball is to count your makes and misses which I believe is something I can do in my head?  The app modes on here are the games every kid does on the driveway on a daily basis but put into an app to make it seem substantially technical and helpful.  I guess if you’re lazy and don’t want to track your stats or write them down then the Wilson X and its app would be useful if they were accurate…

Stats are only valuable if they are accurate and unfortunately, accuracy is a problem is a problem with the Wilson X.

Makes can only be registered on the Wilson X if the goal has a net and if the shot is 7 feet or longer (no  layups or dunks) which is fine. I’m assuming it “reads” misses by either feeling the pressure of the net or by the ball slowing down as it passes through the net.

Here are some of my “results” 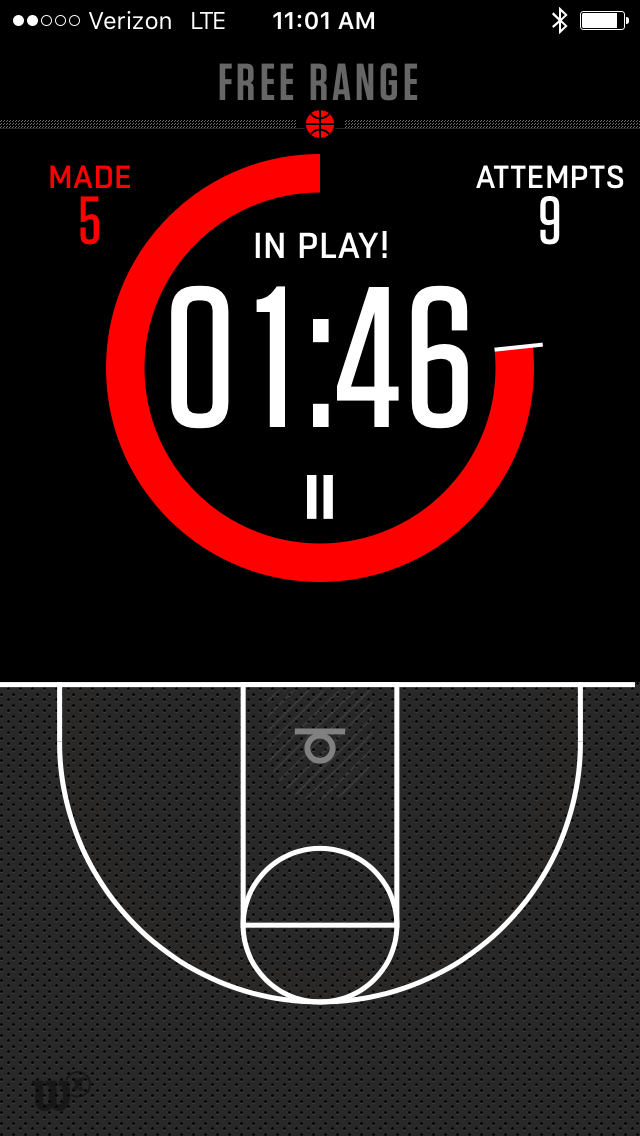 I actually shot 5 times at this point

It doesn’t take me 75 seconds for one free throw

There is sometimes a lag between shots taken and shots registering on the app when they do register. Who wants to keep looking at the phone to make sure it tracked the shot ?  It is easier to just count in my head and write them down. This happened to me every time I used the ball and was very annoying. One time at home I tossed the ball up in the air and I registered a make which is weird because I have no net in my house.

To be fair, the 94Fifty isn’t  perfect either and will occasionally miss a shot but it isn’t counting makes and misses so i isn’t a big deal to me .
How does the Wilson X compare to the 94Fifty?

I know I will come off biased but having worked out with both balls (insert joke), it isn’t even close.

First off the “Workout” portion of the app forces you to make X number of shots at a certain release speed before moving on to the next level.

Below: types of shots in the workout 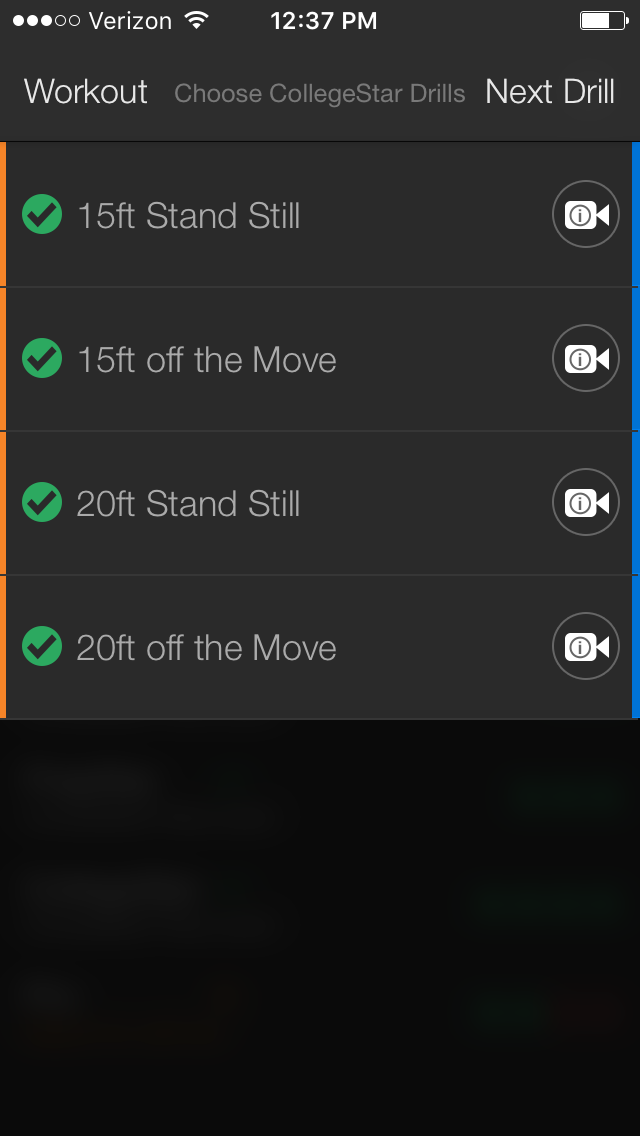 The 94Fifty shooting workout forces you to

You do have to count them yourself unless you buy a Smartnet (more on that below). Having the pressure of needing one more make to pass creates more pressure than the Buzzer Beater and  Game time modes of the Wilson X.
Since you have to make shots within a certain release speed to pass a level, it creates more of a game time situation and thus adds pressure as well. So often I’d come within one shot of passing a level on the last shot that it would drive me insane when I had to start over. At least I’d get more reps in

In addition to the Workout, the 94Fifty tracks spin rate and arc of your shot so you can see how you compare to the ideal. 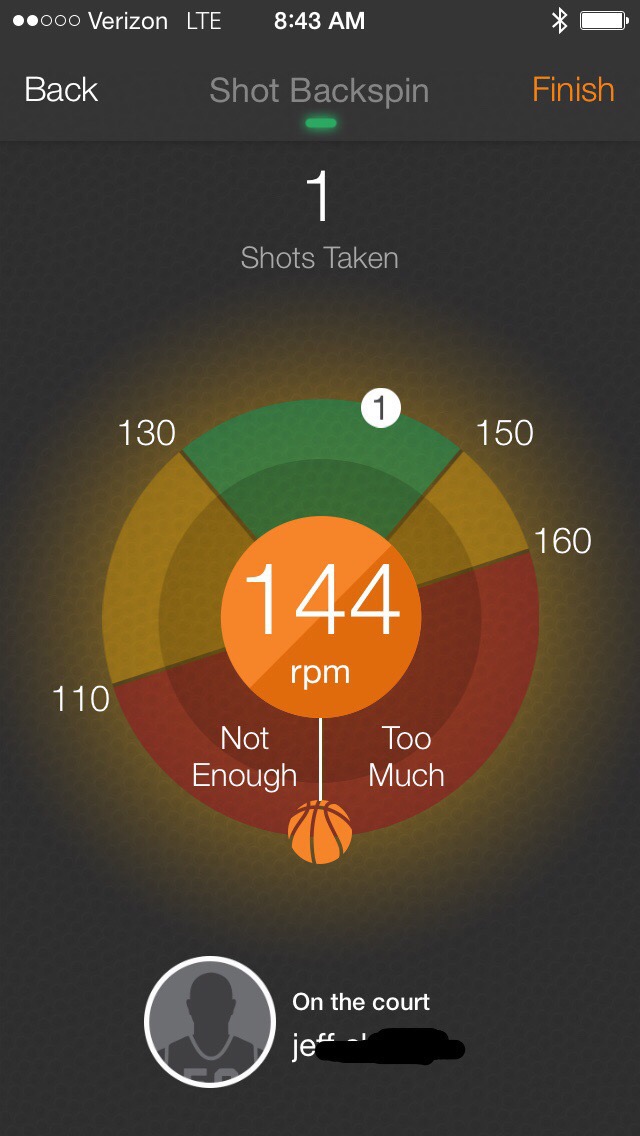 Sure, jumpers will go in with knuckleballs, high spinners, low bullets and rainbows but we are talking ideal numbers. Even if you choose to not shoot the ideal jumper, at least you can see how consistent your arc and spin are. Not everyone has the same shot but  your shot needs to be consistent to have a chance to go in.

The 94Fifty can measure dribble speed, power, and control and has excellent workouts that are fun and difficult to pass based on your skill level. As dumb as it sounds, having the voice of the “coach” really pushes me when my forearms and hands are dying from all the drills. Don’t expect to just stroll in with the 94Fifty and get better though; the ball requires you to push yourself and you will sweat A LOT. The dribbling workouts were the real reason I bought the ball and I’m now sharing it with my son so he can get better . If only there was a way to make 94fifty look like Minecraft…
Lastly if you really want your phone to count your makes and misses, 94Fifty does sell a Smart Net that does that  but logistically that’s a problem especially if work out at public courts such as the Y and 24. Maybe a little clip that attaches to a net would be easier for consumers to install and remove on a public court.

Before you finish reading this review thinking I’m some kind of Wilson hater or 94fifty fanboy, I should state I am big fan of Wilson Sports. They make some of my favorite tennis rackets of all time, (the Wilson Prostaff and all the newer iterations) and are my preferred tennis ball. I think their golf equipment is great and underrated but needs a serious image overhaul. And don’t forget about my love for the Solution basketball. All that being said, I feel they put out a rushed to market, overpriced and underwhelming product that acts as little more than a shot counter. $200 is a lot of money for a ball that just counts shots poorly. I’d say $75 to $100 is the max for a ball with such limited function. The Wilson X can be ordered at Wilson.com by the way.

For that same $200, I can get the 94fifty which can help improve dribbling and shooting with next level statistics. You can find the 94fifty at Eastbay or 94fifty.com. (Use coupon code bball25 to save $25 off $169)

Don’t  expect to buy either ball and expect to become better though, you have to put in the time and work. I just think the 94fifty does a much better job keeping it fun and motivating. Happy balling !

Posted in Head to head comparisons