*finishline already marked down to $79.99 Link*

Executive Summary: simple yet smartly designed for the most part. If you ever wanted the Kobe 8, Nike basically repackaged it and renamed it with a few subtractions. Midfoot and torsional support is dependent solely on the insole which may or may not be a deal breaker for some. Minimalist lovers who want a low to the ground feel with great traction and fit will enjoy these.

You can see the lack of torsional support with the insole in.

I passed on the Mamba Mentality I and II because I’m not a fan on drop on insoles. I did pick up a pair of the II for $50 to compare though. With the Mamba Instinct, Nike appears to have fixed one of the main issues I had with drop ins: pinching between the insole and upper. Plus I think this version looks great, almost like a Kobe VI China colorway.

Cons: Lunarlon isn’t the most bouncy cushioning and tends to die quickly, torsional and midfoot support is severely lacking and comes only from the thickness and density of the insole

Best for: light weight guards who want a low to the ground minimalist feel

Sizing: true to size lengthwise, widefooters can go up half a size if more width is needed

Buying Advice:BUDGET MODELS ALWAYS GO ON SALE, wait if you can. Fair price is $80, bottom around $50 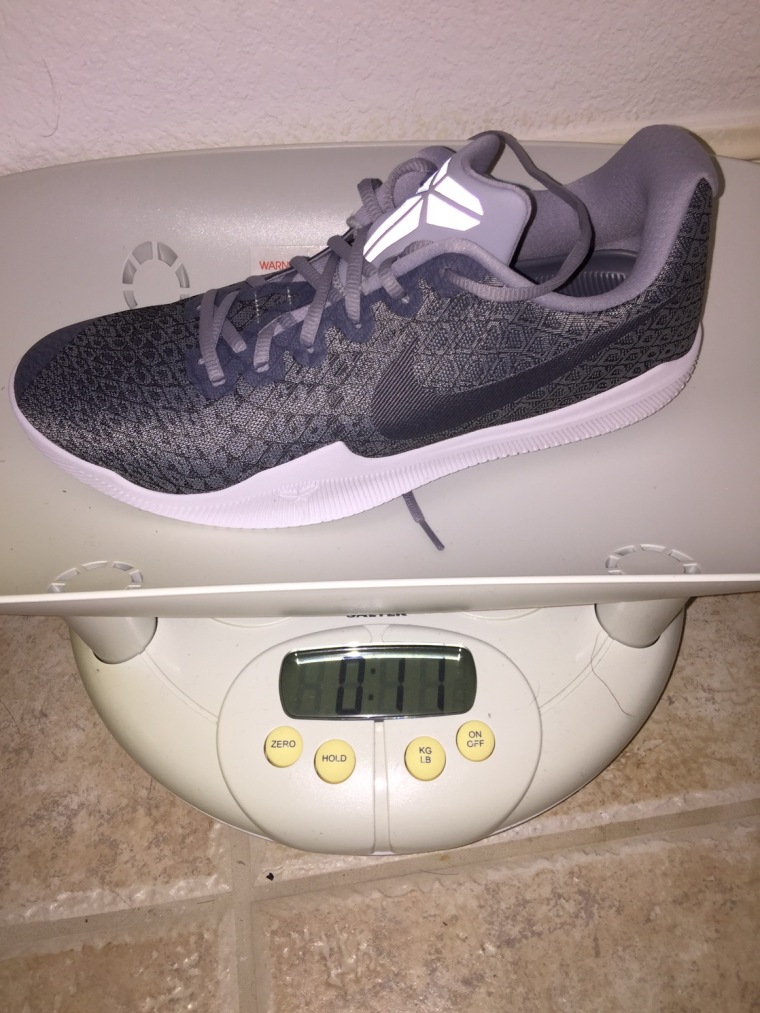 11 ounces in a size 11. Guess lightweight is back again.  2.5 oz lighter than the Rare Metal and KD IX

Micro this, micro that, micro tread traction as Nike calls it.

I found this traction pattern to work great on clean floors (what doesn’t) and on dusty floors. Some dust gets stuck in the grooves during long sessions but they don’t require a lot of wiping at all. Per usual, I tested these out against my Clutchfit Drives, the bottom traction performer in my rotation, at my local dirty floor gym aka 24 Hour Fitness and I had to wipe within five minutes in the CFD. However, the Instincts hummed along at least a full hour before I had to wipe which is fantastic. What’s the secret? It’s the varying depth of the microtread. 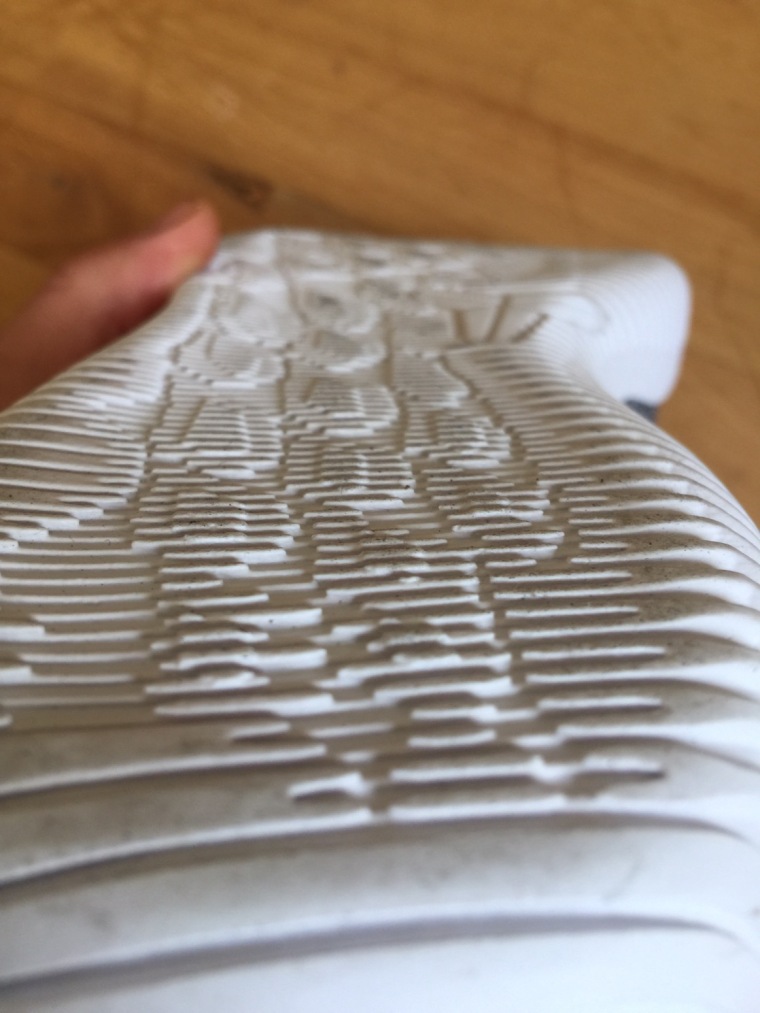 If you look at the first pic of the traction you’ll see how the center of each micro tread “pod” is darker at the center. That first layer catches the brunt of the dust so the next layer can grab the floor (thus it looks clean). And if that doesn’t work, you have the regular herringbone along the outside. This is all theory of course but if it works it works right ?

The rubber is very soft and pliable so I don’t recommend these for outdoors as you’ll wear down the micro tread. For those keeping score, I put these a little behind the Kobe A.D. but way ahead of the CFD and Harden.

As I stated earlier, I’m not a fan of drop on insoles because I always get that pinching between the insole and upper on cuts. Nike actually fixed that issue by raising the walls of the insole (I know Nike did this on some other models like the Kobe 9) So thank you Nike.

Even with the firmer set up, cushioning is directly underfoot so it feels good overall. That was one of the points of the Kobe System right? Lunarlon isn’t my favorite cushioning set up since it loses its fun factor quickly as it dies. But even without that spring, it doesn’t mean it isn’t working but Nike really needs to come up with a Lunarlon Plus or something to keep pace and make the cushioning fun.

No deadspace side to side and very little above the foot. Zero heel slip as usual from the get go. Adidas should really copy this formula.

Flyweave for $100? Funny how quickly a “premium” materials ends up on a budget model. I don’t believe upper material costs are as nearly pricy as companies make them seem, it’s just to get the consumer sucked into the hype or feel good about dropping extra money for the same ol same ol. I blame all shoe companies for their marketing BS with materials.

Anyhoo, this is a woven done right. I’ve complained in the past about wovens and knits because of their elasticity but Nike put the softness and reinforcements in the right places. 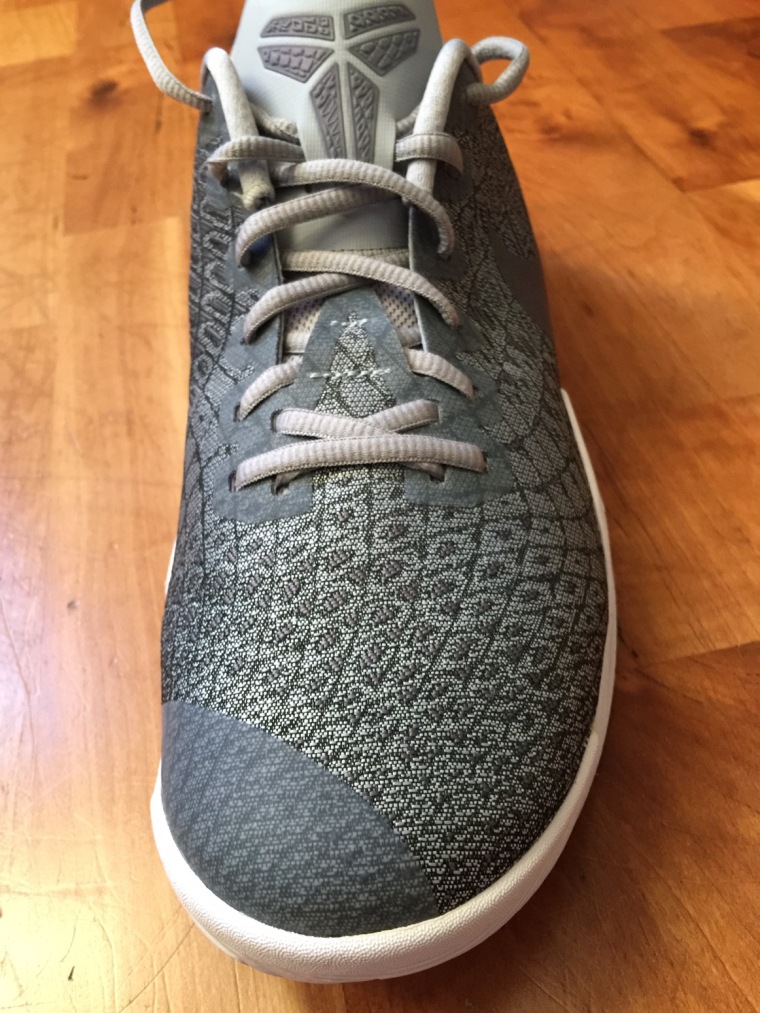 The toe box and pretty much the front third of the shoe is reinforced with a TPU or soft synthetic. Minimal popping if any. Nike states it has TPU yarn in the forefoot but that synthetic backing will do more than any yarn.

The lateral side the from the 1/3 and back is pure weave. You can see that TPU up front

In case you’re wondering, the materials on the Instinct feel softer and more premium than what is found on the Mentality 2.

Overall the materials are great and gives a budget shoe a premium feel which in turn gives the consumer a great sense of value. Nice upgrade from last year which felt a little more plasticky.

Support comes from the excellent fit and fairly sturdy heel counter (think Hyperrev or KD 9 but a little stiffer). Looks and feels the same as the Mentality 2. 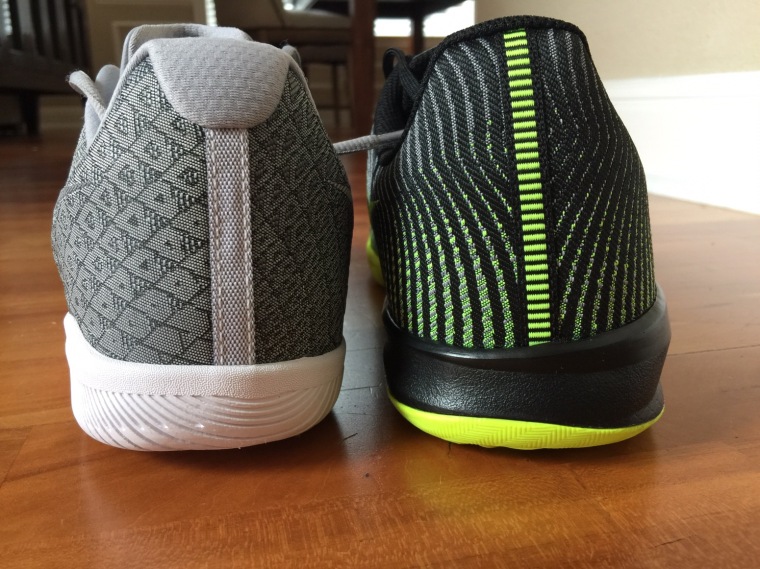 Keep in mind that there is practically no midfoot support except the firmness of the insole. The shell of the shoe is a joke. This didn’t take much effort at all to do. 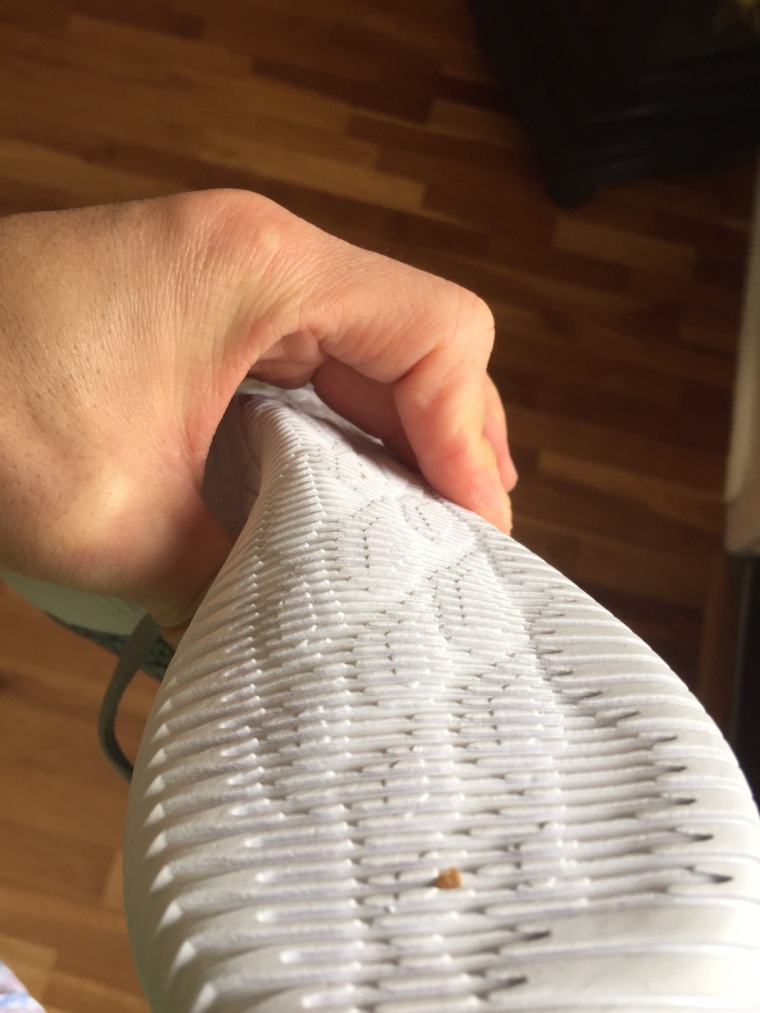 I bought the Mentality 2 to compare and I can’t do this to it because the outsole is firmer and thicker. I can fold it in half though but it takes more effort and I can’t bend it much past midfoot

Just for fun I tried to do this with the Kobe 8. The Kobe 8 has a carbon fiber shank that limits the bend midfoot and back. The 9 uses firm foam to limit the bend as well. 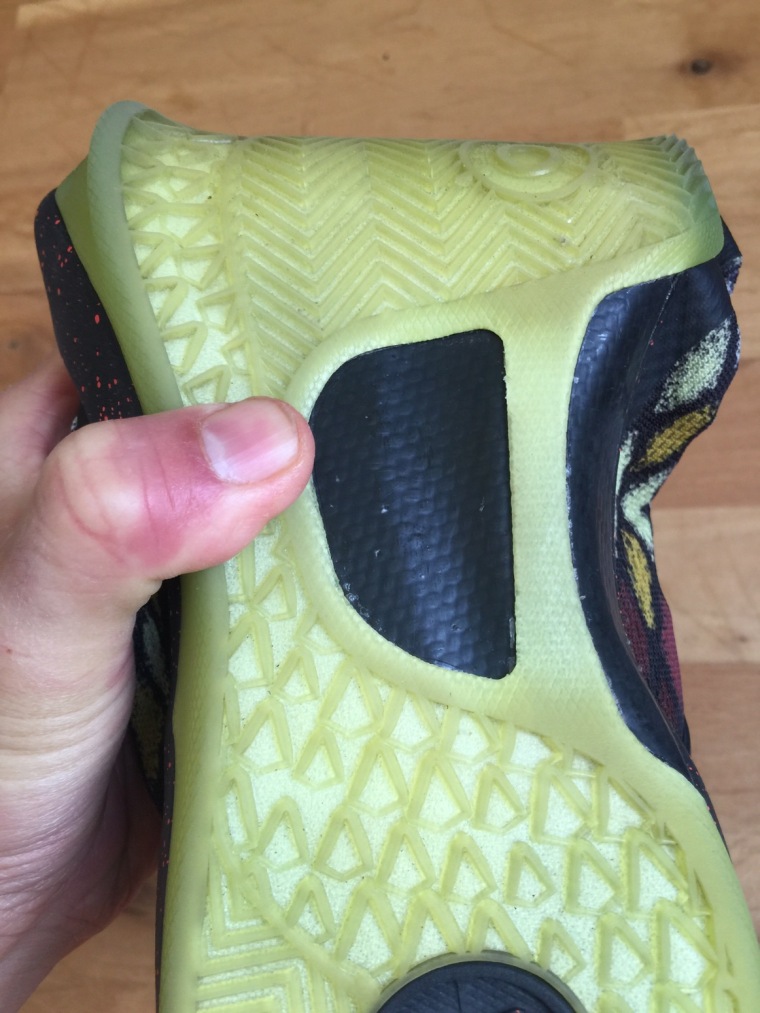 I had to twist and squeeze pretty hard to make this insole do this. Nike made this insole firmer and thicker than the Kobe 8 and 9. If you really wanted to, you could just glue or tape a credit card or two to the insole to improve rigidity but Nike really should have done it for that measly 5 cents it probably costs.

Some players will hate that there isn’t any midfoot support while the majority of people won’t care. The upside to the flexibility of the Instinct is that it feels natural on foot.  I fall into the latter most of the time but I occasionally get plantar fasciitis so not exactly ideal for me. For what it’s worth MJ had carbon fiber shanks put into his shoes for his plants fasciitis so it’s doubtful he’d approve of these. 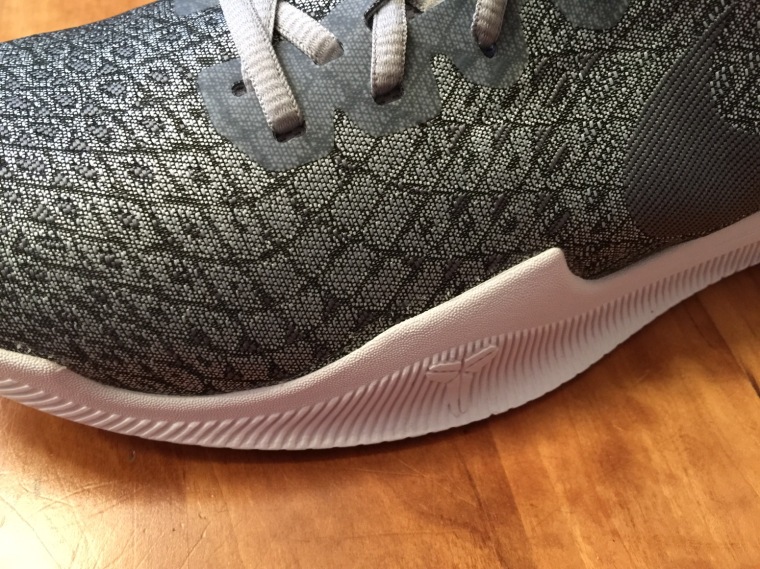 The outrigger on the Instinct is where it should be and doesn’t get rolled under the outsole like the A.D. The entire outsole is very flat and doesn’t feel tippy.

Overall support and stability is good but midfoot support just isn’t there. 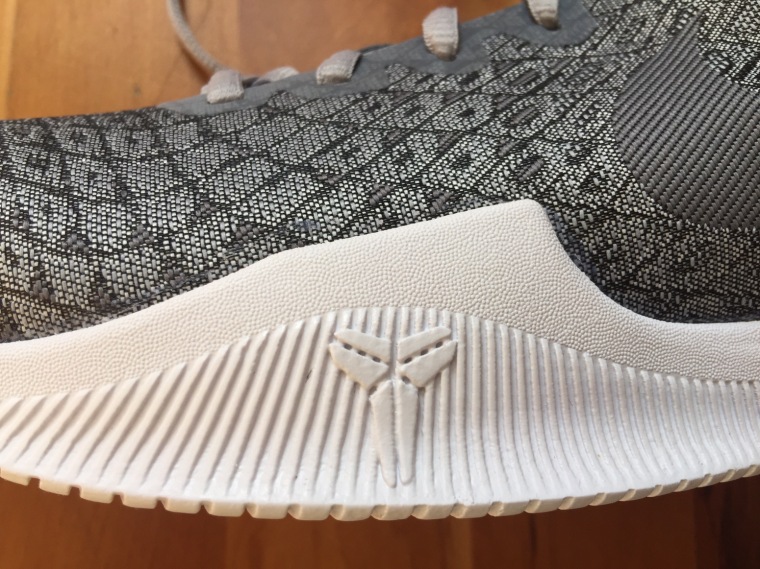 A reinforced upper, a footstay and a raised wall in the insole?! Is Mexico paying for this or are the taxpayers ? #makenikegreatagain

This is my first pass at the Mentality, I mean Instinct line and I am pleasantly surprised. 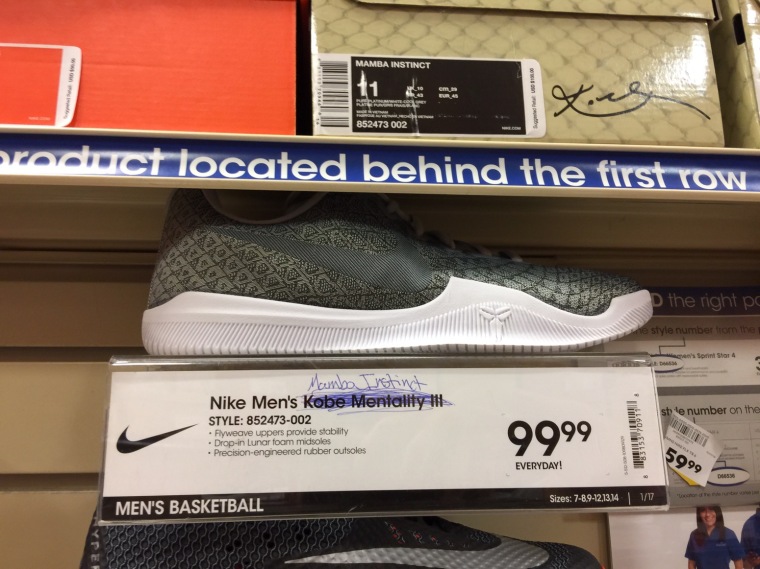 Even my local Academy Sports carried these and had the name wrong. At least they fixed it 🙂

Side by side under normal play, I had a hard time differentiating performance wise between the Kobe 8; both sit low to the ground with excellent traction and fit.  The Instinct has does have firmer cushioning, a softer upper and better fit (yes a better, more snug fit) but gave up midfoot and torsional support. Although not ideal, I can’t complain about the lack of midfoot or torsional support since I don’t have serious foot problems. However, I won’t use these in the long run due to occasional plantar fasciitis flare ups. If you’ve ever had PF, you know how damn long it takes to go away. I like having a shoe that I don’t have to concern myself in case of a worst case scenario.

For $100 though, you get a lot of bang for the buck but as I’ve learned over the year, budget models hit sales faster and harder than it’s premium signature shoe cousins. Plus no Kobe on court will only accelerate the discount process. These can already be had on Eastbay with coupon for $80 already so expect price cuts in the coming months then add a coupon to get them down to the $65 price point for some serious value. #budgetballing