*update 5/18 tech specs up finally, so it is Anafoam and it is EVA just like the 4. Lightweight is a generous term at 14 ounces for a low*

With Curry’s return imminent, I figured this would be an opportune time to post this review.

Go ahead and try some of the combos Curry does here. You’ll look like molasses compared to Steph while building a pile of bricks.

I’ll save everyone the effort from scrolling down: there is no reason to buy the Curry 5 when the Curry 4 does everything just as well or better, especially the traction.

Pros: traction on clean floors, feels low to the ground like the 4, decent fit after break in, stability, containment

Cons: needs a lot more wiping than others on dusty floors, fit could be better with some tweaks, cushioning is underwhelming again

Sizing: true to size, wide footers can go up half a size if needed

Buying advice: Pi day sold out but I’m guessing it was due to limited production numbers, not high demand. General releases will be easier to obtain and will go on sale like all Curry’s except the 1. 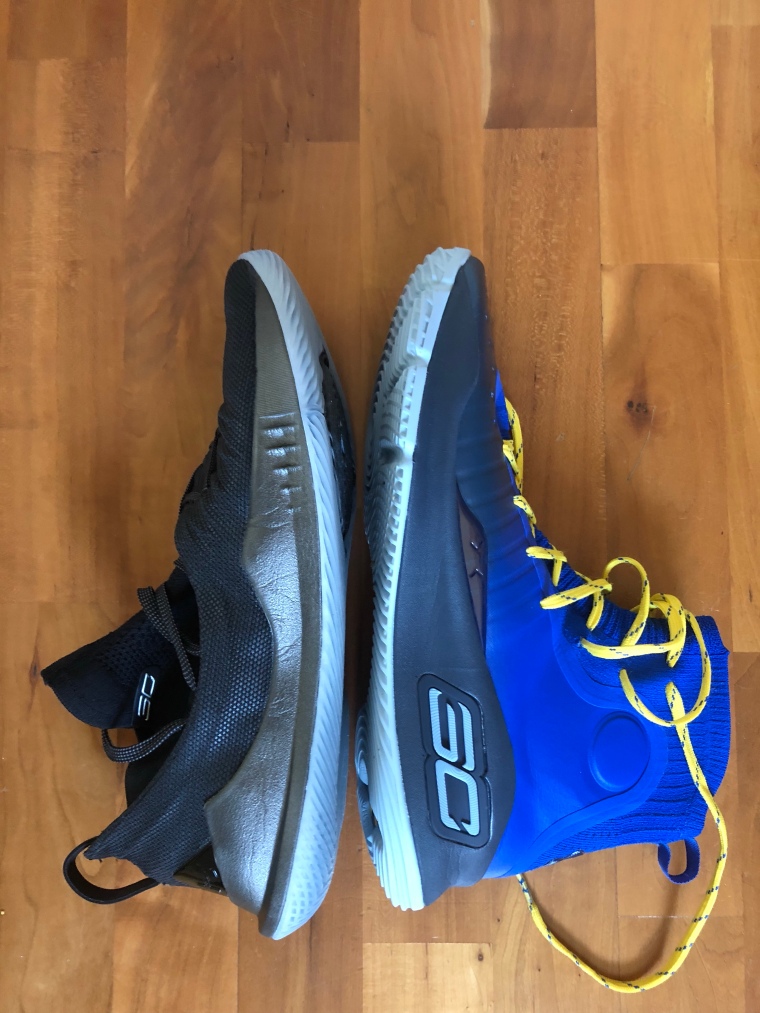 So 1.5 ounces heavier than the Curry 4 Low as well as the mid. 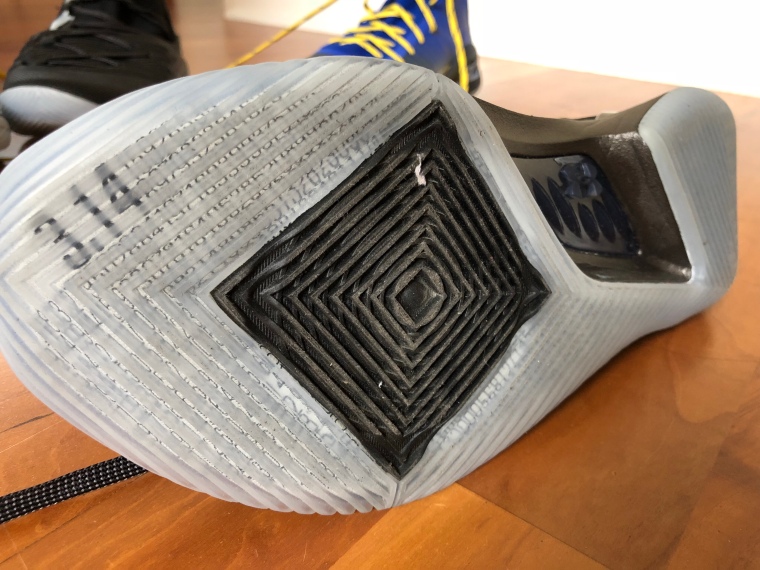 I’m going to skip all the mumbo jumbo that UA states on their site about PI and squaring a circle.. my goodness, who does UA’s ads?

The Curry 5 uses a blade traction pattern with a section in the forefoot that runs in the same direction but it’s just a different compound and color with a circle running below the blades. Really sticking to the squaring a circle theme huh, UA?

On clean floors I had zero issues (what doesn’t) with plenty of tackiness and no wiping. On dusty floors though, wiping wasn’t just necessary, it was REQUIRED. Let’s just say I got a lot of hamstring curls in during my games in the Curry 5. I don’t mind wiping but it picks up dust very quickly to the point that it just plain gets annoying. I’ll try and upload a vid soon on the traction. It’s very Jekyll and Hyde when it’s clean versus dusty.

Initially I thought the square portion was a softer rubber but it is actually very firm with little to no flexibility and much more shallow than the rest of the shoe. 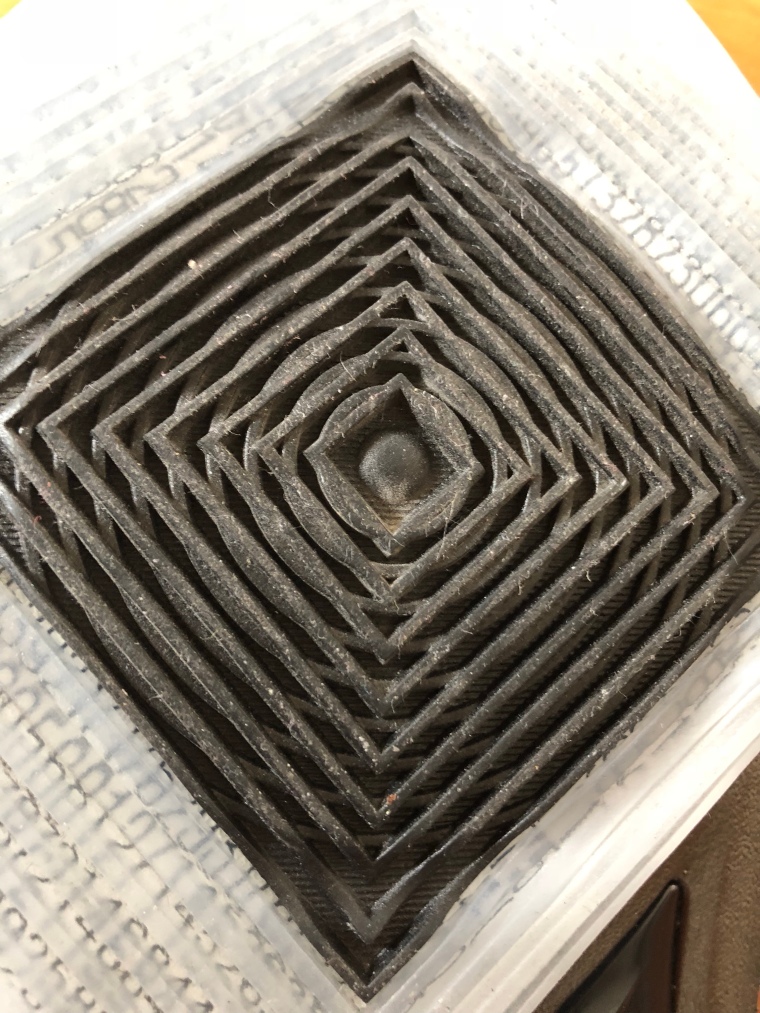 By being inflexible, the outsole can’t brush away dust and you can see it just sitting on the outsole after I played on a clean court. I think it might have worked better without this solid portion on the forefoot.

Compared to the 4: definitely not an upgrade 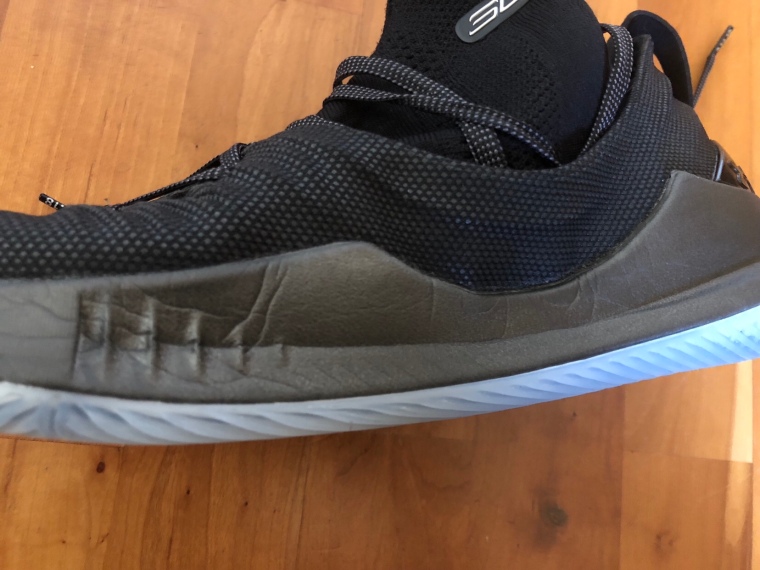 EVUA is back and is still boring like the Curry 4 set up although it feels slightly firmer and snoozier to me. There really isn’t any feedback with EVUA on either the 4 or 5. It also uses the exact same insole as the 4.

I had a hotspot on the lateral left foot to start but it went away after a few runs. I’ve read and seen the issues with blisters (thanks to the Marco Rafael who told me about that) and thankfully I didn’t have any even with my wide flat feet. You can see the difference is the shape of the arch on the medial side here: 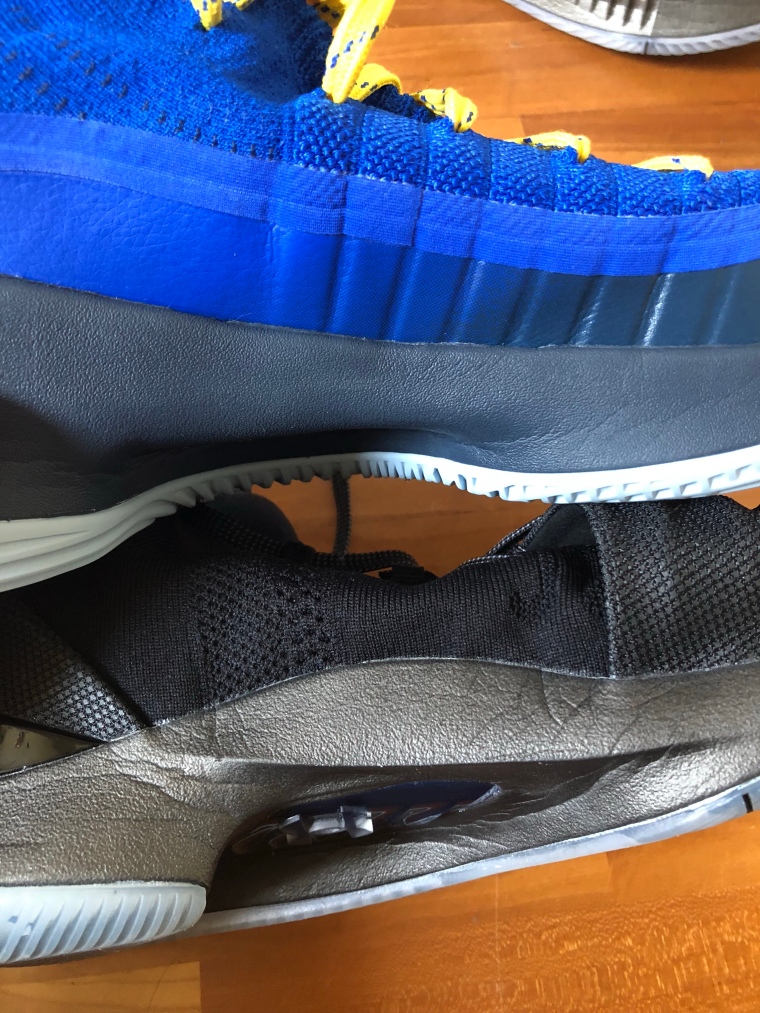 The pronounced arch area isn’t very flexible (see pic under support) and the foam feels firm so it could easily be a recipe for blisters. If you do get blisters buy some moleskin, tape to the inside of your arches and you should be okay or at least better. Or just buy the Curry 4.

Steph himself probably doesn’t have any issues with these since:

Compared to the 4: pretty much the same but slightly stiffer/less smooth. Not an upgrade in my opinion

Curry lows have always been sketchy for me fit wise. The Curry 1 and 3 fit fine but the 2 and 4 lows had serious heel slip due to the placement of the top eyelets. These started off really poorly for me but broke in enough to the point that it wasn’t really noticeable. On a scale of 1-10 with 10 being a perfect heel fit, these sit around an 7.5-8 which is better than what I experienced in the CLB16 before I added extra eyelets. The lateral side has an eyelet that sits further back than on the Curry 4 Low and I think that really helped the fit for me (I had some heel slip with the 4 low) 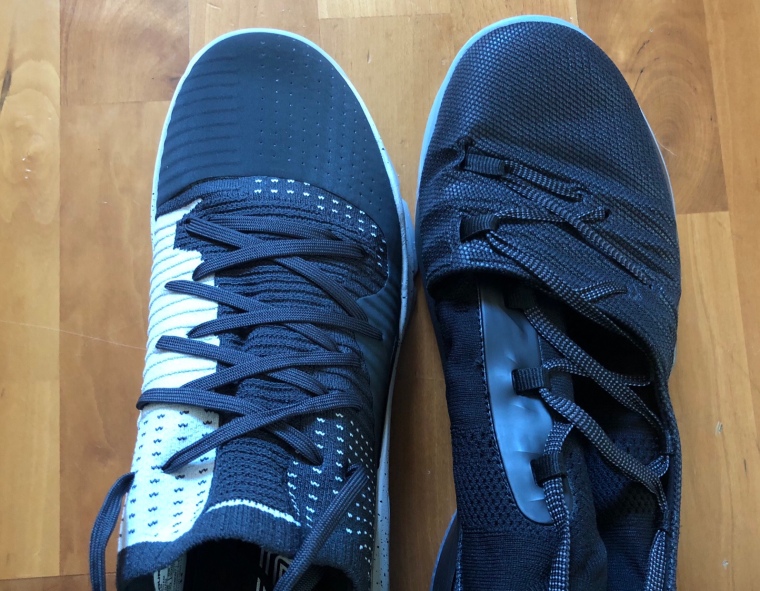 UA definitely could have improved the heel fit by:

The knit doesn’t have a lot of compression so it feels a lot different than something like the Harden V2 set up.

I don’t think the heel fit was bad it just feels a lot different than what I’m used to. It seriously feels like a sock sitting inside a shoe. But as I said above it could have been better

Moving on, I had no issues in the forefoot or midfoot with any movement or sliding. There is some lace pressure near the top eyelets but it went away over time.

Compared to the 4: not an upgrade vs the mid. Slightly better for me than the low.

The inner sock is composed of knit while the outer shell is purportedly Anafoam even though it isn’t stated on the UA description. It looks like Anafoam with its texture but it is much stiffer than what was on the Curry 1. You’re only as flexible as your stiffest part (that’s what she said?) so just because it might be named Anafoam, it doesn’t mean it’s the Anafoam you know and enjoy. It does break in with play so big deal to me but some people are big on materials.

Compared to the 4: about the same

Honestly, if UA left the shell off, the shoe might have play better. There are several other ways to provide support, containment and durability to a shoe. I feel like it’s there for no reason other lacing and aesthetics. 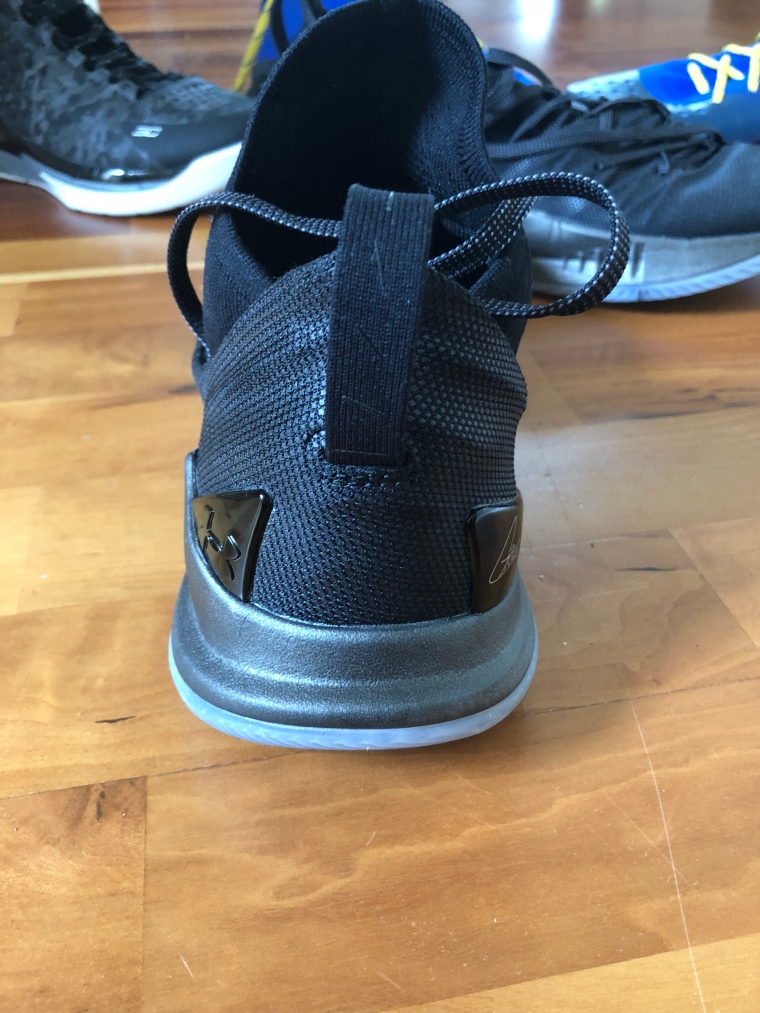 Since this is a low, support comes from the fit and the heel counter. The heel counter is much firmer (and it exists!!) than the Curry 4 low but isn’t as firm as what you’d find on the Kobe 4-6. Heel fit is decent so you have an average supportive low overall.

There is a shank but I can roll it into a ball just like the Mamba Instinct. As you can see below everything bends except the middle of the midsole. Quite the paradox eh UA? It’s like squaring a circle!!

On the bright side stability is excellent with the Curry 5 thanks to a very wide and flat outsole. Imaging slapping a mini ironing board on the bottom of a shoe and you have the Curry 5. 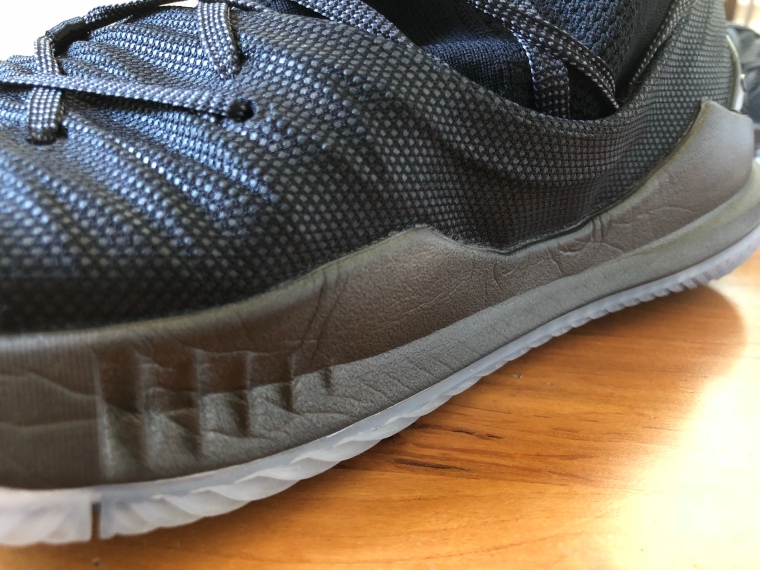 No issues at all thanks mostly to the raised midsole and partially due to the outer shell.

Compared to the 4: same

I’ve played in hundreds of shoes over the years and I usually don’t get overly excited or down on shoes. The Curry 5 is what I call a pretty average shoe with some minor flaws and poor dusty floor traction performance. On clean floors or freshly wiped it works great though.

I can say without a doubt that there is zero reason to “upgrade” to the Curry 5 from the 4. I got a better lockdown from the the Curry 4 mid even though the fit was very fickle. As I’ve said numerous times, mids have a more reliable fit than lows which is a good thing if you can’t try them on. With the 4, you also get much better traction and a little smoother cushioning for the same price or less. And if you like rollie pollie shoes, get the Mamba Instinct; Better traction, materials, cushioning and less than half the cost of the Curry 5.

If you do get the Curry 5, don’t give up on the heel slip after one or two wearings because it should improve as the midsole softens up. I recommend bending it like an accordion for a new minutes to help accelerate the process. Overall the shoe works well enough but doesn’t really do anything extremely well other than stability. There are plenty of other good options under $130 especially as the NBA seasons winds down.

If you’re a Steph fan like me, grab the limited editions at retail and don’t feel bad, it’s Steph’s shoe so who cares about the performance aspect if you’re a fan. Depending on how the Dubs do this post season will really affect demand more than any performance reviews because sneaker nerds really make up a tiny percentage of sales. I expect these to be around $100 after coupons then drop into the $75-85 range. Overall, these are going on the third team and most likely staying there.

Now while we wait for more colorways of the Curry 5, let’s just enjoy these ridiculously unpredictable and competitive playoffs. Rockets or Dubs, Dubs or Rockets? Pelicans? Lebron and the Crapaliers? Sixers ? TheSix?

I freakin’ love this game!!