*4/30- deciding to upgrade my traction rating on these. Seems to be similar on dusty floors as any other shoe when in comes to wiping*

Harden is ruining the game

Harden travels on his euros and step backs

Harden is taking advantage of the rules

Harden is the greatest offensive weapon ever

Harden is the centerpiece player you want

Harden is a better iso player than Jordan

After some time in the V2, I think the shoe is polarizing just likes it’s namesake and it definitely isn’t for everybody. But you have to give credit where credit is due; Harden is having a monster year (again) and the V2 is an improvement over the its predecessor, the Volume 1

Cons: needs wiping on dusty floors like other shoes, heavy for a low top, break in needed, some lace pressure at top eyelet, very stiff underfoot midfoot and back

Best for: bigger guards to bigs, not for players who want a minimal, flexible shoe

Buying Advice: wait as always. I got my pair with a coupon at Dick’s for $112 on release day. Already coupon eligible on Eastbay. $100 or less is fair, bottom around $65 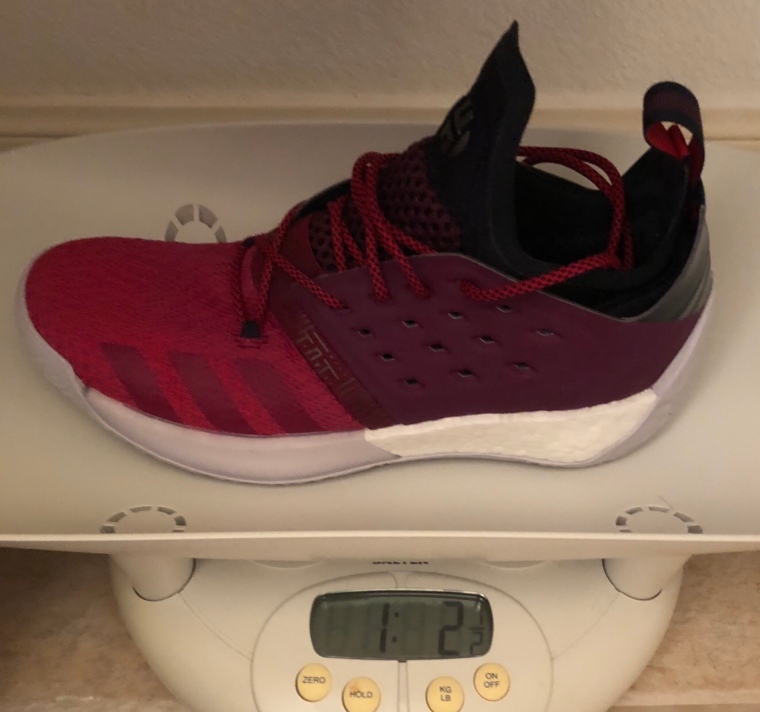 I erroneously said it was 17 ounces in my midway review. It’s actually 18.5 ounces which harkens to Lebron weight but in a low top.

For reference the Kobe VI weighed 9.5 ounces so that’s almost twice the weight. It doesn’t matter to me but don’t tell me this is lightweight. Most lows weigh around 13-14 ounces. Ball don’t lie, neither do numbers.

Fractal pattern is Adidas’s name for it, I call it the lotus root and cantaloupe rind pattern.

Traction is ridiculously good on clean floors and I never say that. However, on the flip side you do need to wipe agood amount to stay stuck to the floor when it gets dusty. The rubber is soft and there are a lot of flat portions and contact points so it’s just swiffering the floor for the next team.

*By the way where has Continental rubber been for the Adidas Bball line up the past two years? Yea it didn’t do anything for indoor hoops you’re welcome.*

Is it better or worse than the Volume 1? It has much better stopping power when clean but just as bad a little better on dusty floors so overall it has a slight edge in my book. I’d rate these better than the solid and translucent outsole of the Harden V1 but not as nearly as good overall as the Crazylight Boost 2016 or Rose 7. Like the Dame 4, humidity and clean floors are your friend with the V2.

Although it looks like a lot of voluminous Boost, it is not actually that high. Your foot sits below the green line. If you take a look at Fastpass, you can see that it’s actually about 2-3 mm more than the V1 and about 3-4mm than the CLB16. Adidas stated somewhere that it’s the most Boost ever used and technically it might be (read on) . Adidas also swapped out the traditional fiberboard strobel and went back to cloth ala Rose 6.

All these changes sound like you’d get a super soft ride, softer than any Boost shoe in Adidas’s line up doesn’t it? Yep, I thought the same too but it’s the firmest set up out of the Boost basketball line up in the past three years. I personally really liked the set up because it’s a nice blend of speed and impact protection but I know lots of people want it softer (that’s not what she said). I feel like this set up is more BMW like made for quick turns than a comfy floaty ride of a Cadillac.

How did Adidas manage to give us more Boost yet make it feel firmer? My guess is that while there is more Boost in the shoe, that extra bit they added is not actually underfoot. Look how wide the Boost sits outside the shoe, as well as how far your foot sits below that green line I mentioned above. 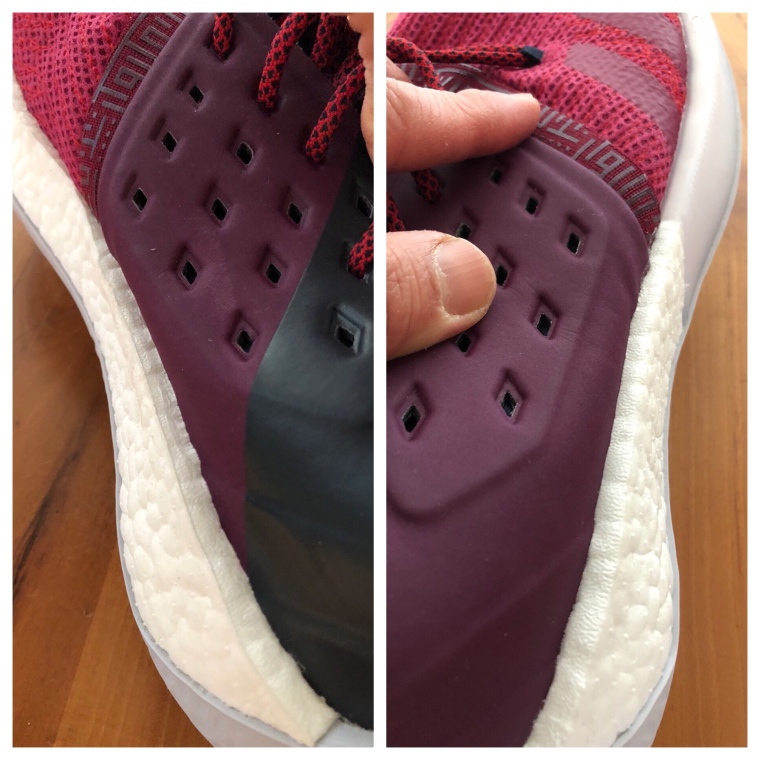 Also, the shank’s shape takes up a lot of space underfoot so a lot of there isn’t as much Boost and/or it’s serially compressed.

Don’t forget that Adidas can change the density or spacing of the pellets as well.

Overall, it feels similar to the Dame 4 set up but with a little more volume and spring thanks to Boost. There is not a ton of give like the older Boost set ups but it is feels more refined for quicker movements.

Per usually Adidas runs slightly long but it’s shorter than the V1. Wide footers like myself will want to go true to size because these run snug true to size. I fit both length wise but preferred the width of my regular size 11. Regular and narrow footers will want to try these in store if possible but I’m pretty sure they can go down half a size depending on preference. The thick rand at the midfoot will really affect players with high insteps so once again try these on in store.

The fit is great out of the box for most of the shoe while the heel fit needs time to break in. Most of the shoe feels very one to one thanks to the one piece bootie. It is a very similar set up (and look) to the Nike Zoom Crusader which Harden wore when he was with Nike. Ground breaking design it is not. 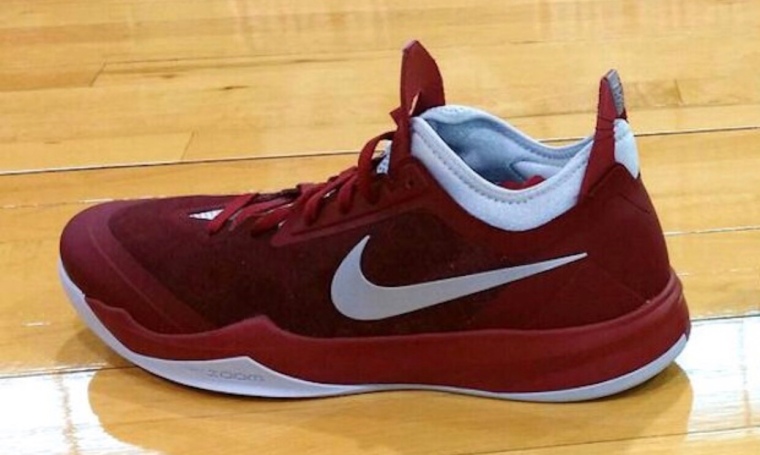 The heel collar has more padding and contour to it than last year as well so it does a decent job even without break in. 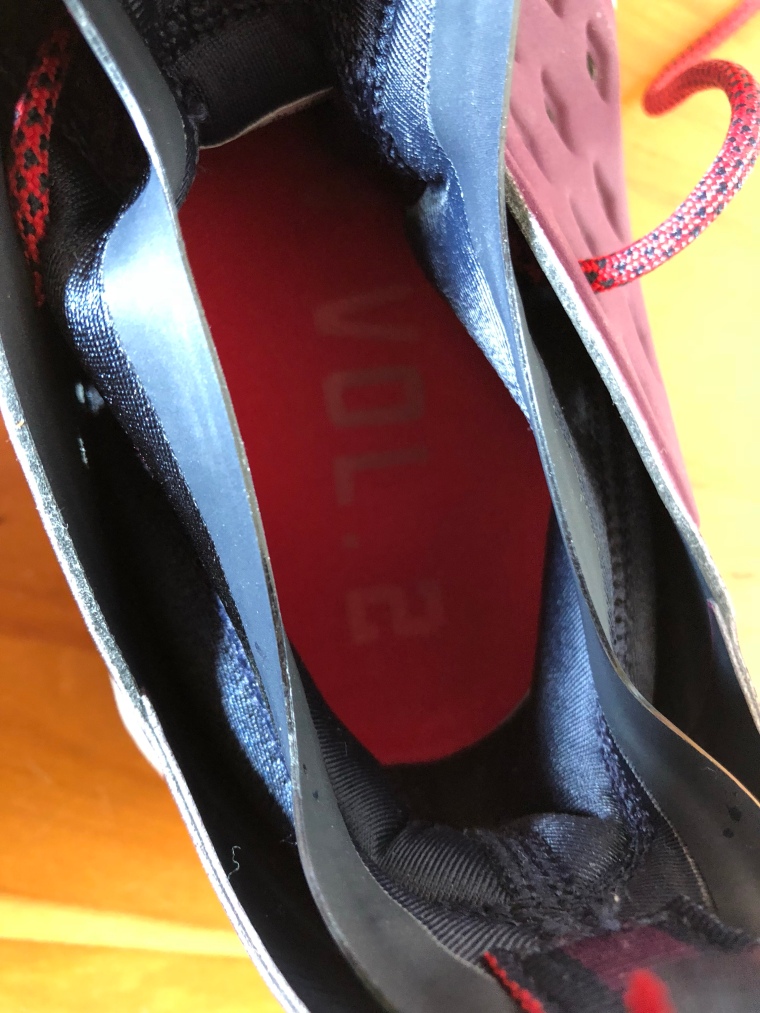 I had a bit of heel slip the first week or so but after this past week, the slip is gone.

The main reason for the needed break in is the stiffness of the the shank plate. Midfoot and back has almost zero flex, similar to the Dame 3. You can either play through the stiffness to break it in or you can real use your muscles to flex and soften it up a touch. Seriously it takes some muscle or leverage to get these to bend.

I’m pretty much pushing down with all my might

Lastly the pegboard is back and once again it doesn’t really do much. I ended up lacing the top eyelets so I could spare some laces for the last eyelets and using the second to last eyelet in the rear. I had some crazy lace pressure with the furthest down just like in the Dame 3.

How does the fit compare to the V1? Much better in opinion. The V2 feels like it hugs the foot better due to the inner sock construction filling in every little bit of space around the foot. Break in time took a few hours but in my opinion it is well worth the extra effort. 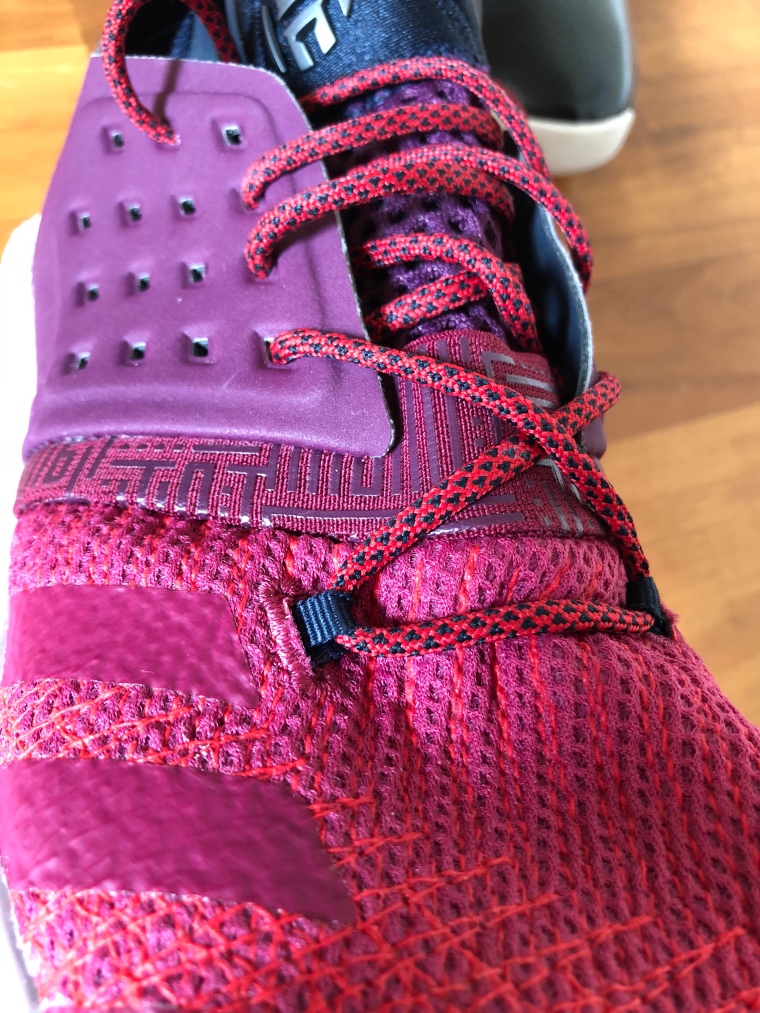 Heat-pressed, TPU-coated fibres that are stitched in to provide targeted support and lightweight durability

Sure it isn’t Primeknit but it looks premium with all that texture and color. It probably does little to nothing to the upper but kudos to Adidas for premiuminizing boring looking budget materials. It’s like watching a makeover show for sneaker materials.

The rear of the shoe is enveloped between two sturdy synthetic panels. 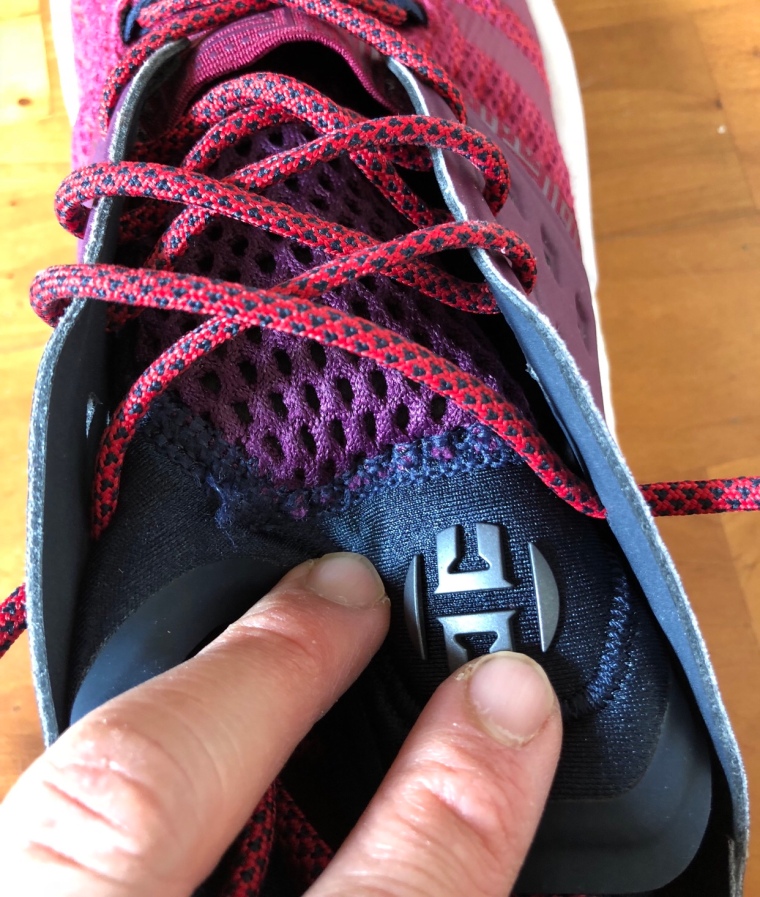 They might not look or feel great to the touch but it works as intended and that’s what counts.

Although the V1 used some nicer materials, it made no difference on court. I thought these were on par value wise with the retail price. 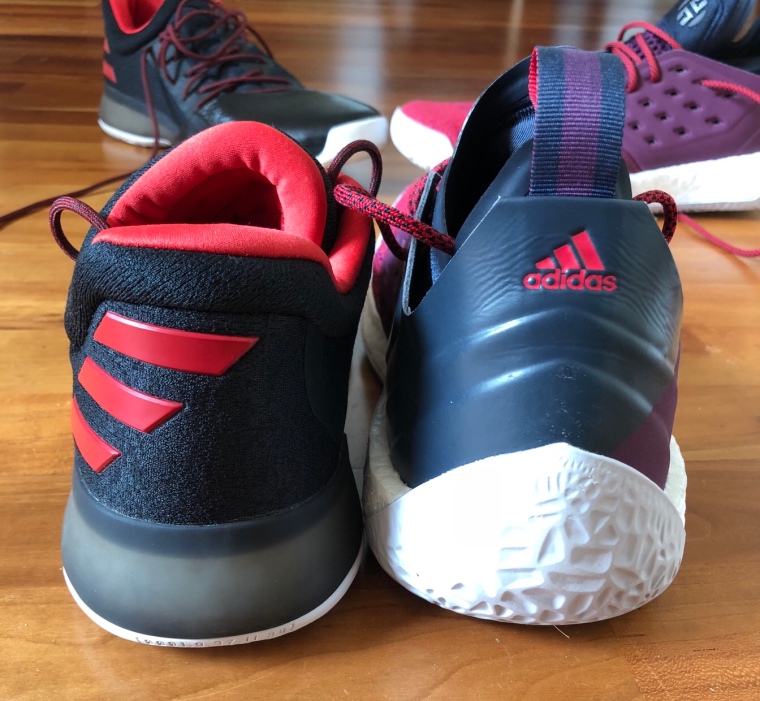 I really think this area will imake or break it for a lot of players. Since this is a low, support comes from the fit and the heel counter(s).

Like my abs, this thing is rock hard (just kidding about the abs not the heel)

Adding to the support is the hidden shank which really makes 3/4 of the shoe a stiff board. As I said earlier it is very similar in stiffness to the Dame 3 but the Boost pretty much hides the stiffness. The only part that really bends is the forefoot. Some may like the stiffness while others may not. I don’t think these feel clunky at all thanks to the Boost but you have to break in that shank. If you like a more natural or flexible feel, stay away from this shoe.

Stability is excellent on the V2. Like the Dame 4, the outsole is ultra wide and your foot is just sitting in a raft of Boost.

I really enjoyed the wide outsole and never felt in danger or turning my ankle at all. 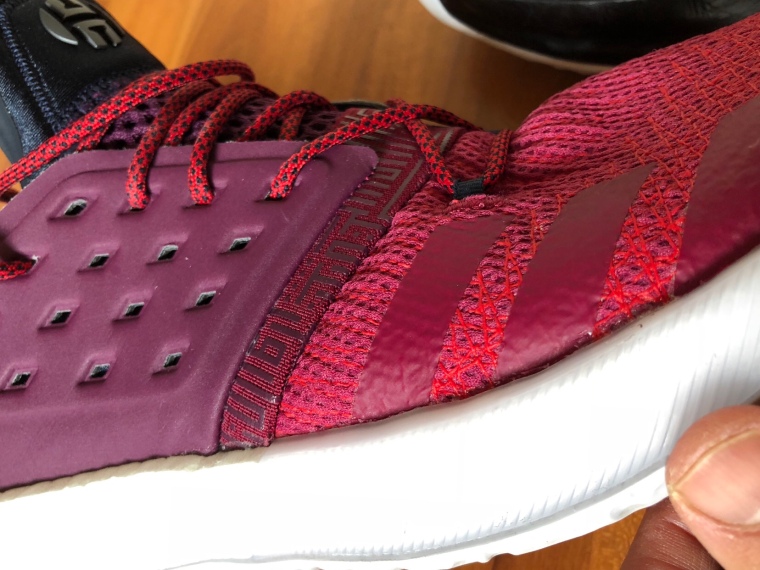 I was skeptical when I saw the pictures of the V2 but Adidas added a thick TPU piece to keep the forefoot from flexing. Add in the strong synthetic panels and the tough midfoot rand and you have great containment.

I’m probably one of the few consumers that actually appreciates the 1.25-1.5 year release. We don’t need a new model year after year especially as new colorways are coming out only a few months before the new model. The only reason we see new models every twelve months is to make sales number work.

Overall I feel that Adidas improved everything on the V2.

And like the Dame 4, this shoe is extremely fun to wear. I really like this shoe a lot more than the V1. However, again like the Dame 4, it will only be allowed on clean floors. I played a tournament this past weekend and used it for all seven games and had zero issues since the court was clean and waxed. One other player I talked to had them as well (the only other person I saw with them) and he said he was normally a Kobe guy but loved the V2 as well.

I think people in general will really enjoy this shoe if you allow some break in for the traction. You still have to wipe but not as bad as I initially thought when I posted this review.

Overall I’m pleased with the traction