Yes I know the Lebron XVI was released ten or eleven days ago but sometimes a shoe doesn’t need three weeks of break in time to get everything working correctly. I do want to note that my pair had some broken Zoom fibers which I can honestly say I’ve never seen but it didn’t affect the cushioning at all.

Maybe I’ve just been eating too much 🤷🏻‍♂️

Sizing advice: true to size or whatever you got in the XV

Buying advice: hypebeasts will go nuts for these since Bron is in LA but players should still wait. $185 is the priciest bball shoe out there due to the Nike and Lebron name. $150 or less is fair (what I paid, thanks Dick’s, Twss) $80-95 is around the bottom. 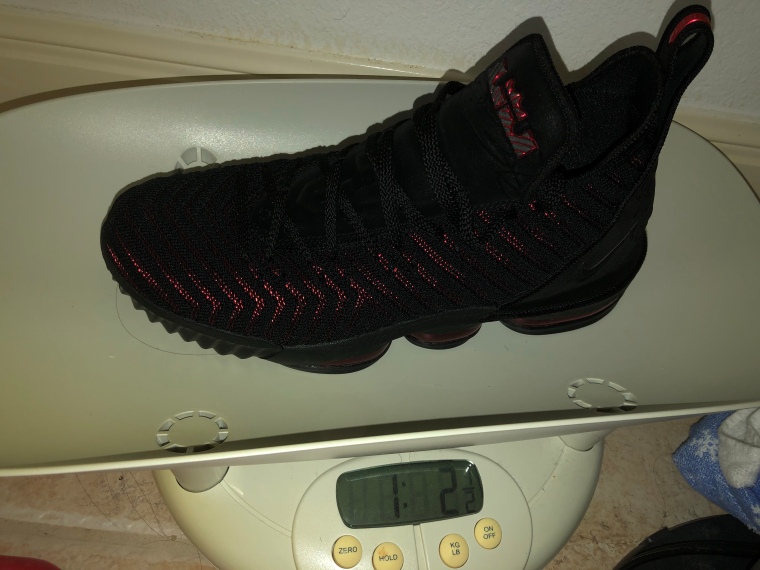 I could care less about the weight and at 18.5 ounces the XVI is a chunker even for a mid (this is not a low). Most mids weigh around 15 ounces while lows average about 13.5-14 ounces. Hit the gym kids if you can’t handle a few extra ounces. 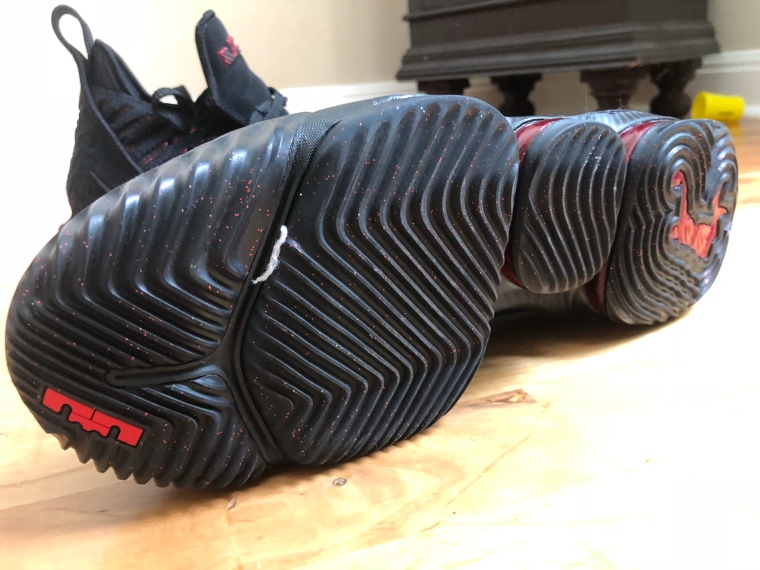 Easily the most improved area from the XV to the XVI. The XVI incorporates a pattern very very similar to the Soldier XII which coincidently I reviewed last month. It isn’t quite as thin and pliable like the Soldier XII but it works well, far better than the XV.

The rubber used on the XVI is softISH but the blades are thicker than what the Soldier XII used so it doesn’t bite or brush quite as well. You also have to break in the traction a few hours especially in the forefoot to get better bite but it doesn’t take long. Some occasional wiping is needed on dusty floors as well but not often. Easily the most improved part of the shoe from the XV and it’s the best traction on a Lebron sig since the X.

These started out a stiffer than the XV but broke in within a few hours to give a very similar albeit still a little stiffer ride to the XV. If you loved the cushioning on the XV you’ll love these.

Both the XV and XVI ride fairly high so if you prefer a lower ride don’t buy these. Last year’s XV rode very high so at least these are back down to Lebron X range.

These still sit around 25-26 mm on the forefoot (down from 28-29) and 30-31 in the heel (down from 34-36) which is a good 3-4mm lower than last years (10-15% ish) so if you like Kobe or Curry low to the ground these are not for you. I personally like them lower but it’s all preference and there is no right or wrong answer here. One of the best players I know who is an ultra shifty guard, Lifetime Fitness Ultimate Hoops MVP, semi pro MVP (who literally won the championship and MVP yesterday) and one man wrecking crew loves his XV’s so just comes to show you it ain’t the shoes.

Zoom done right is a perfect balance of impact protection and responsiveness and well, that’s what you get with the XV and now XVI. 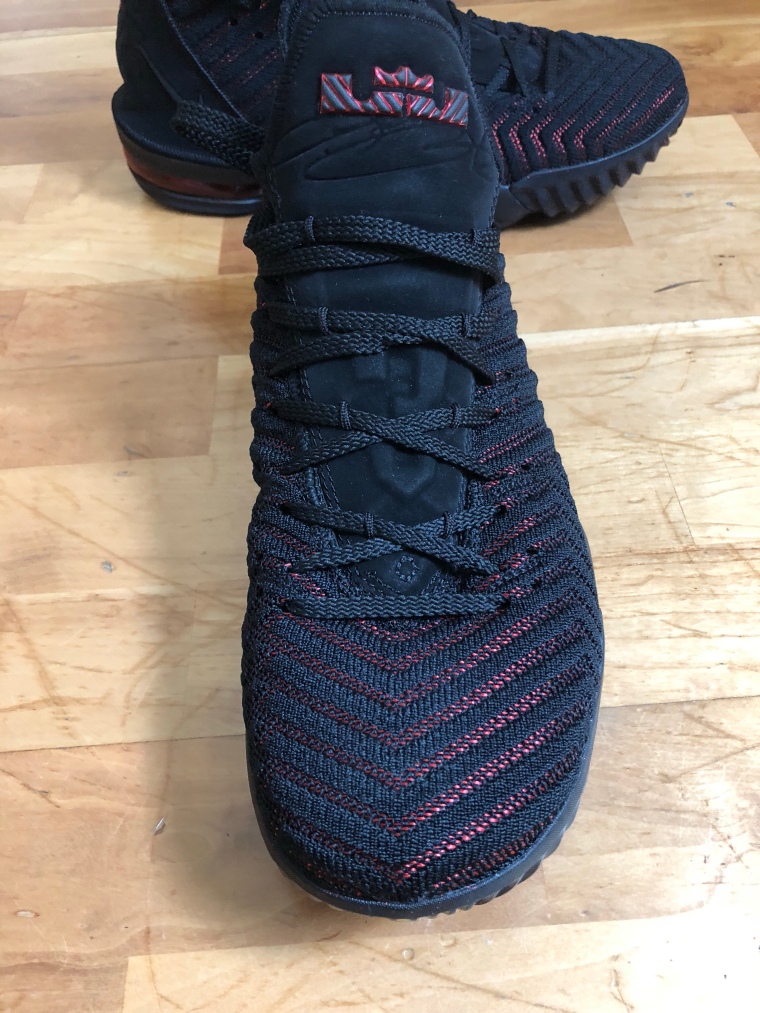 I went true to size with the XV and I went tts with the XVI as well (finger width at the toe). I tried on half a size down as well but I just preferred true to size. I’ve said it many times before but you can fit more than one size so experiment with each shoe if you can.

Notice how the “tongue” pulls up for easier access. I’ve never had issues putting one piece shoes on but this should help those who do.

No deadspace at all in the toe box for my fat feet (I think narrow footers can go down half a size) but I did have a little heel slip in my left shoe the first few nights in the XVI. I decided to use the lower eyelets to help and it really worked since it is lower and further back. HOWEVER, it is a pain in the as* to do it because there is glue inside and between the holes (kinky I know) so it took a solid ten minutes to relace just the top eyelets! Maybe arthritis is setting in but it was difficult and made the Harden V1 relacing seem easy. Let’s just hope Nike doesn’t call extra eyelets something like “lace customization technology” #marketing 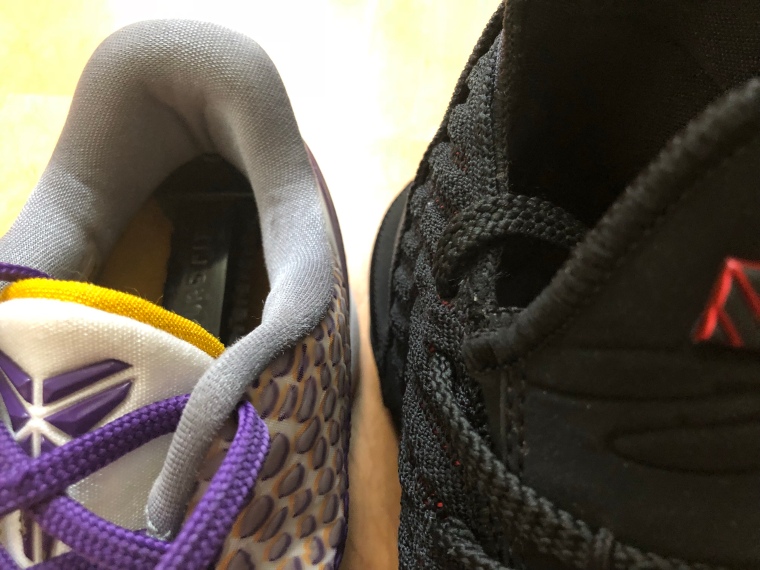 This is how you accelerate break in time

What was really affecting the heel fit was the stiffness of the midsole out of the box. It really wants to stay straight but if you bend them like I do with a lot of shoes, it helps soften up the foam so it conforms to your foot much faster. Once again this is a mid called a low so heel slip really shouldn’t be an issue.

Overall the fit was very good but the heel took some time to break in. After break in, it felt a lot like the Hyperrev 2016 heel where it’s locked in but just feels kind of “floaty”. Very similar design in terms of how the padding is set up around the Achilles.

If you don’t like the feeling, go find a Kobe or another shoe but it just takes some time to get used to it. 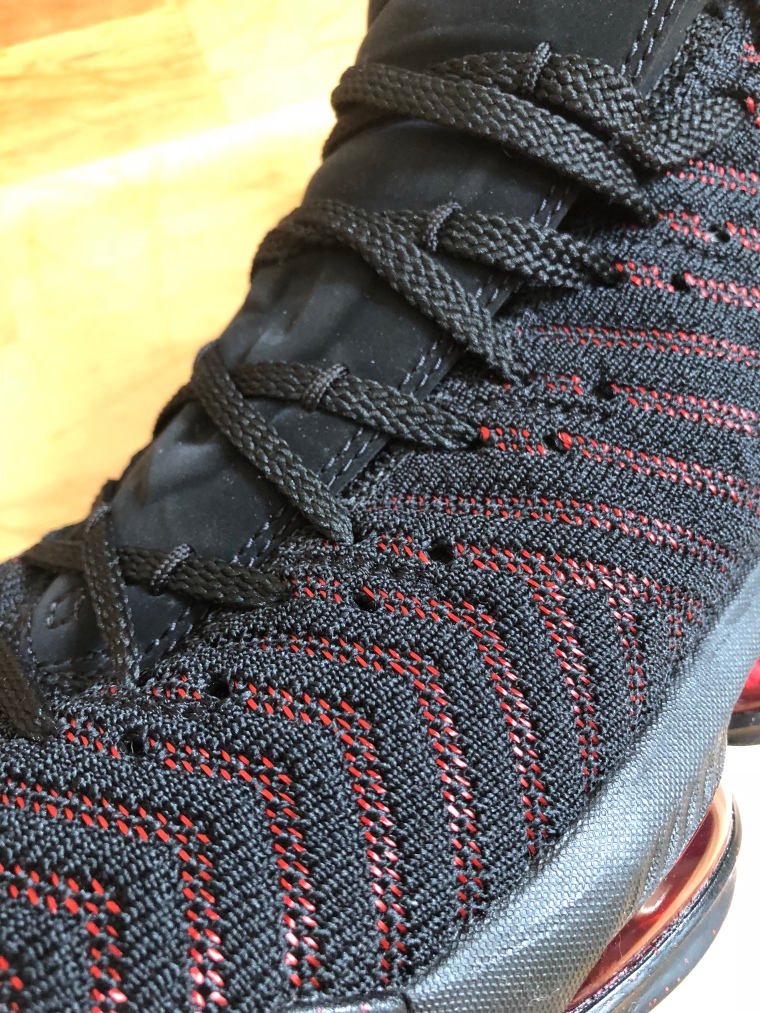 I think shoe companies and so called shoe experts are finally realizing that softer and stretchier doesn’t equal better. Nike’s Battleknit 1.0 was soft with more reinforcement than previous Flyknit applications.

Knit 2.0 feels like it’s backed by a thicker backing but remains flexible but with less stretch. It wouldn’t shock me if it’s the same type of fuse used on the Lebron X but covered in knit. I really like how these were done and feel nice to the touch. Flyknit really allows a lot more texture and color blocking that mesh doesn’t allow. That’s the main benefit of Flyknit…well that and higher profit margins.

The NBA has gone postionless and so have the shoes.

We now have mids called lows and lows called mids (See Kobe AD Mid). These are lower tops not low tops but are higher than my Soldier VI. The only difference is how the slope of the shoe is more gradual. Whatever

Regardless of nomenclature, support is minimal and comes from the heel counter and fit just like the XV.

Stability drastically improved just by adding a tiny outriggers along the entire lateral side.

I didn’t worry about tippiness at all because those little millimeters added a lot of extra stability. Thanks Nike, no consulting fee this time around.

Actually it’s a combination of the large heel counter, thicker Battleknit and the raised portion of the toe. No issues here

Maybe Nike and Lebron visit my site after all haha. I’m not that egotistical nor do I care but everything I didn’t like about the XV (aside from the ride height) was fixed. Better traction, better stability and containment. Hell, next thing you know, a leather hole puncher will be included with each shoe.

So should you buy the XVI now for $185? Ten dollars more than the upcoming AJ 33 🤢 btw. Nope, I walked into Dicks (that just sounds wrong) had a 20% off coupon and got these for $148 plus tax. Like all basketball shoes that aren’t artificially limiting supply , these will be coupon eligible and then eventually discounted and then discounted again as the season progresses. Expected these to get down the $149 mark within a month or two then slap a 20% coupon to get you down to a solid $120. The longer you wait, the more you save #rulesofretail

Although I prefer a lower ride height, this is the best all around Lebron to come out in years. Great traction, cushioning, fit, stability and containment make this a great shoe for most players. Great performer all around with no major weaknesses which sounds a lot like the shoe’s namesake. Finally a Nike sig shoe done right. 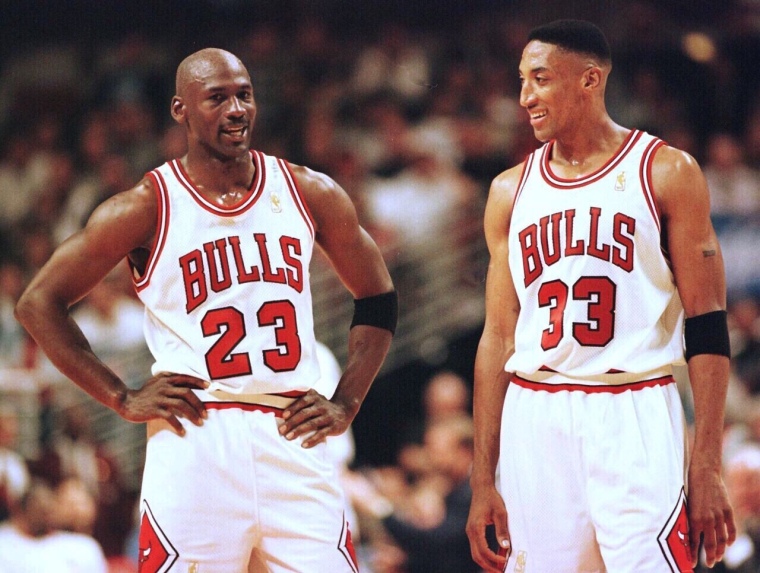